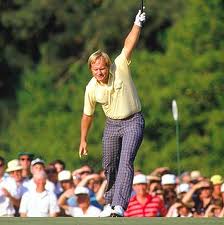 Close your eyes, and think of golf. If this picture of Jack Nicklaus making the birdie putt on 17 in 1986 doesn't pop immediately into your mind's eye, you are under 30.

In 1986, Julie, the woman who is now my wife worked at a Baskin Robbins in Bloomington, Indiana, and if I had a free couple of hours I would ride my bike alongside her to the ice cream store, and then screw around until her shift ended.  Then we would ride back to our apartment.  There was a Service Merchandise store next door, and that’s where I watched Jack Nicklaus post his miracle 30 on the back nine on Masters Sunday and claim a sixth Green Jacket.

The announcers during the CBS coverage of the second round of this Masters wondered whether a Fred Couples victory this weekend would trump Nicklaus’ feat twenty-five years ago.  The answer I yelled at the TV was “NO!”  Not that it wouldn’t be remarkable for a 51 year-old to beat young bucks like Rory McIlroy and Ricky Fowler, but the Nicklaus narrative of 1986 was just so improbable and magical that unless Nicklaus sharpens his game next year at the age of 72, nothing at Augusta National will ever rival that afternoon.

I stood at the TV watching the beginning of the CBS broadcast in 1986, and started doing the math.  With 13 and 15 coming up, if Nicklaus could post a couple of birdies, he could raise a little hell and move up the board.  He had already birdied nine when coverage started to get to -3, if my memory has been dulled by the 25 years since.

Julie was a little confused that I was so excited, running into the Baskin-Robbins to report that Nicklaus was at three-under.  “Okay, is that good?” she asked.

“Hell, yeah, that’s good.  If he can get to four as he rounds Amen Corner, he’s got two reachable fives, and that could get him to six or seven, and if he picks up one more, hey, who knows!” I told her as I bolted back to the Service Merchandise.  Every commercial break I sprinted to Julie with another report, more to kill time during the commercials than to give her information I knew she had very limited interest in.

Nicklaus birdied 10 and 11, and I was bouncing around the TV area, telling various shoppers what was going on.  They cared less than Julie did.  I was the only person who cared, which was inconceivable to me.  I tried to provide a little additional context with each stranger who treated me like some deranged and dangerous nut, “Nicklaus hasn’t won at Augusta since 1975!”  “Nicklaus hasn’t won a major in six years!”  “Nicklaus is 46, and his son Jackie is on the bag!”

So it was just me and the two dozen TVs, all tuned to CBS so that perhaps someone would see what was going on and would join me.  No luck as Nicklaus bogeyed 12.  I told Julie, and was still optimistic and doing the math.  “Huh?  Hey, want a milk shake?”

“No time, got to get back to the TVs.  The next three holes are crucial!” I yelled back as I sprinted back to Service Merchandise.  Thinking back on it now, I was like Shooter Flatch in “Hoosiers” ranting in the booby hatch about how no school as small as Hickory had ever won the Indiana state basketball tournament.  Thankfully, no one at Service Merchandise had access to a straight jacket, or they might have laced me up.

Nicklaus got the stroke back at 13, and followed it with a par at 14.  He needed eagle at 15, and that didn’t seem likely, but there was a look in his eyes – a weird sense of calm and joy.

That was the remarkable part of what Jack did in 1986.  He had this silly grin on his face like a man who knew exactly what was going to happen.  He still had the skill and nerves to do the job, and the wisdom to enjoy it while all hell broke loose around him.  There was an aura of conscious perfection in Jack’s manner that day, and those who bothered to stop and watch noticed it too.

The eagle came at 15, and all of a sudden I went from slightly obnoxious curiosity to full blown madman.  I yelled, whooped, and leaped repeatedly after that eagle put fell.  I ran back to update Julie, who was becoming annoyed with the increased frequency and agitation of my hysterics.  I told her that Nicklaus needed to pick up at least one more stroke in the last three to have a chance.  Seve Ballesteros was still leading, and Greg Norman was closing.

Nicklaus hit a tee shot on the par three 16th, and I almost jumped on top of a stout elderly lady moseying through my aisle as the ball caught the slope and rolled inches away from the stick to its final resting place at what appeared to be eight feet.  CBS replayed the tee shot, and a moment after Nicklaus hit, his caddy/son said, “Be right.”  Nicklaus replied without looking, “It is.”  And then he winked.  I get goosebumps writing about it.

A man so in total command of his moment has to be awed.  When most would be quaking at the thought of winning a Masters years after being a serious contender, Nicklaus was totally immersed in his element.  The roars from the galleries punctuated every stroke, and instead of filling Nicklaus with fear, it stoked his confidence.

The putt on 16 fell, and then came 17.  If Nicklaus could birdie either of the finishing two holes and par the other, he would shoot 30 on the back, and dare to dream – if he birdied both that would make for a 29 on the single nine hardest holes in major championship golf.  The back nine at Augusta on Sunday has claimed more than it’s share of victims, as it would that day as Ballesteros dumped a shot in the drink to take himself out of Nicklaus’ way.

The drive for Nicklaus went right on 17, but he recovered to the center of the green, after catching the slope to take the ball away from the hole.  And then it was venerable Verne Lundquist’s time to go to work.  A lifetime of excellent work, and Lundquist’s “Yes SIR!” remains the signature moment in his career.

It’s truly a gift to watch something special when you know something special might be happening.  The same thing happened with the 1980 U.S. Olympic Hockey team.  Fans love to paint the picture before the deed is done, and only the crazy thought that Nicklaus could do the near impossible.

My wife understands the context of the story to enjoy watching specials on the round of Jack’s life.  We all know the stories about the yellow shirt, worn in honor of a boy who died of bone cancer in 1971, and Nicklaus’ mom being at Augusta for The Masters for the first time since 1959, and Jackie on the bag to share an unforgettable father and son moment after the par on 18 all but sealed it.

Sure, Norman needed to miss a putt for Nicklaus not to be forced into a playoff, but what’s new?  If anyone was more than capable of missing a big putt to allow a moment of grace to be shared among the Nicklaus Family and his fans, Norman was the guy.

It was a sweet, sweet Sunday with a two-hour moment of wonder, fatherhood, and perfection that makes us smile today a quarter of a century later.  Dreams met reality that day.  It doesn’t happen often, and that’s why we remember with crystal clarity like it was yesterday.

The Service Merchandise and Baskin-Robbins are long gone near College Mall, but each time I drive past, I think of that long ago Sunday of magic.