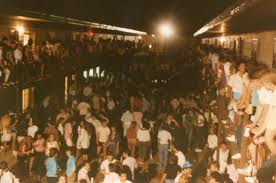 This was early in the night of the Little 500 in 1985. Walnut Knolls D-Building has never been so completely packed with imbeciles and laughter. Today, this kind of fun is impossible.

For many years ending in 2009, friends and I attended the Little 500 bike race at Indiana University as students and alums, and we did things that were brash, stupid, funny, and mean-spirited.  Many of those things we did, you cannot do today because we did them first.

Never an arrest.  Never a reprimand.  We walked around like we had total immunity, and it was either that confidence or blind luck that got us through unscathed for nearly a quarter century.

But as a result of our fun, you can no longer do many of the things we did, as the police and sects at IU charged with discipline will not allow it.

Here is the list of banned behaviors instituted because of us –

5 – The four buildings of Walnut Knolls (now Campus Court) were redesigned to eliminate the free-flowing courtyard responsible for so much social activity there over the years.  It was a perfect venue for a party, and in 1985 we had a party so enormous in D-Building that it revealed the weakness in having only two small doorway exits on either side of the 30′ X 100′ courtyard.  At least 3,000 people stood shoulder-to-shoulder in the courtyard and on the second floor walkway.  A fire or police intervention would have cause chaos that would have made The Who concert in Cincinnati look like a farmer’s market.  The building was architecturally redesigned, and a party like that one is no longer feasible.

4 – You can no longer create your own credential for the race declaring yourself a “Special Provost”, primarily because I’ve written about it too many times.  Paulie Balst and his Bloomington trophy wife, the lovely Bunny Amberella, were smack dab in the middle of the Cutters photograph commemorating their 2007 victory because of the status conferred upon them by virtue of the handsome credential.  After the picture, several members of the IU Foundation (not the resume’ padding do-gooder boobs with the IU Student Foundation, but the adults who earn their living by raising money for IU) shook Balst’s hand and thanked him for all he did.  Balst’s response to all congratulatory comments was “Damn right!”

3 – Gallon milk jugs of screwdrivers are no longer allowed inside Bill ‘Army’ Armstrong Stadium.  Why they ever were is a mystery, but for years, as others were forced by IU staff to pitch their small bottles of water, we were allowed to march through the gate with gallon jugs of screwdrivers.  People would always ask how we got them in.  Our thought was always that we were so obvious and brazen that no one ever suspected.

2 – Bands in the meadow after the race used to help keep the race fans segregated from the rest of the student population.  That was until Otis Day and the Knights played and my wife’s brother danced.  He spun like a top for an hour cavorting through the crowd like a 280-pound human wrecking ball, knocking all who entered his path to the ground.  A once huge crowd dispersed and we were left to shamma lamma ding dong virtually alone.  That marked the end of bands behind St. Paul’s.

1 – U.S. Senator Richard Lugar no longer takes part in Little 500 festivities, so the chanting of “Dick Lugar, Not Indiana” has been abandoned during parade laps.  Each year, he heard us yell his name, and he would look up, smile, and wave.  Then he heard the whole chant, which grew louder and more popular with every pass, and scowled.  Now, he doesn’t come to the Little 500 anymore.

There are certainly additional idiotic ways to kill time during and after the race that people have discovered and perfected, but for a brief time in history, we were the standard bearers for foolishness.  The key is in the ability to walk the line between harmless fun and violent chaos with steady grace.

For those going to Little 500 this year, I wish you luck.  There are a million creative ways to enjoy yourselves, and one certain way to get arrested.  Remember that cops will only arrest you as a last resort in trying to maintain control, or if you make it fun for them to slap the cuffs on.  When the po-po shows up, say “Yes sir,” and move on.  And don’t do anything that might hurt tomorrow – which includes driving.

Enjoy abusing your bodies while they are able to withstand that torment, and if at any point you’re not laughing, shame on you.