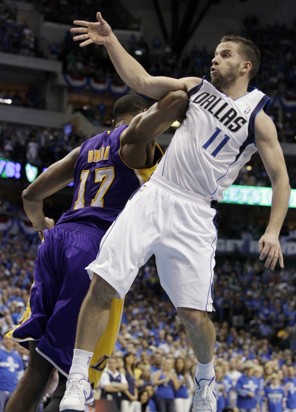 The heart of a champion? Save that phrase for another team. The defending champions? Who knew?

Down 3-0 to the Dallas Mavericks in their second round series of the NBA Playoffs, the Los Angeles Lakers showed the heart of the Tin Man Sunday (pre-Emerald City, of course) as the two-time defending NBA Champions got swept in one of the most disgraceful, gutless performances by a defending champion I can think of.

I didn’t think we were going to see a Boston Red Sox-type of comeback in this series. This team had too many issues and stumbled badly down the stretch. But I certainly didn’t expect to see what I saw in Game 4.

I expected the Lakers to go down fighting. I expected to see composed urgency, the kind you see from an experienced, prideful championship team. This game was doomed from the start. And it got worse.

This wasn’t Magic Johnson’s Los Angeles Lakers. He has the heart of a champion, and his heart was full of pain after watching his storied franchise walk through a humiliating performance full of cheap-shots and missed assignments.

Long into the Game 4 meltdown, Los Angeles Lakers big man Andrew Bynum hammered diminutive Dallas guard Jose Barea with an inexcusable and downright dangerous WWE-like forearm shiver that put an exclamation mark on an already embarrassing situation. Bynum wasn’t done. Following the ensuing ejection, Bynum exited the court only after removing his jersey just so he could make sure we got glimpse of what a man he is.

For his work, the NBA league office announced Tuesday that Bynum will be suspended without pay for the first five games of the regular season next year and fined and additional $25,000.

For his team’s work, the Lakers earned a disgraceful exit from the playoffs. What a way to defend a championship. What a away to represent a great, great franchise. What a way to send one of the game’s all-time great coaches, Phil Jackson, into retirement. You think he has doubts about leaving this mess?

By comparison, the defending NHL Stanley Cup Champion Chicago Blackhawks were down 3-0 in their best-of-seven series to the best team in the regular season, Vancouver. How did those defending champs respond? They won Game 4 by pounding the Canucks 7-2. They followed that up by dominating Vancouver in Game 5 and winning in overtime in Game 6, before losing in overtime in Game 7.

How did the Detroit Red Wings, one of the most historic franchises in the NHL, respond to being down 3-0 in their series against the San Jose Sharks? They came back from a third period deficit in Game 6 Tuesday night to force a Game 7.

That’s how prideful champions respond. Not the Lakers, they quit. They raised the white flag before they hit the floor Sunday.

Fall from grace? It was more like a thud. Not even the “Zen Master” Phil Jackson could do what the great Oz could do and give his team a heart, courage and a brain. All of those elements were missing in Game 4.