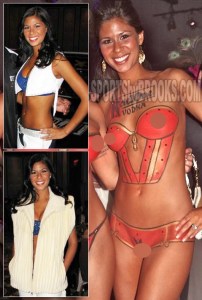 No, Peyton Manning wasn’t photographed in a two-piece.  This lawsuit, reported by the Indianapolis Star, is over claims that a former cheerleader is suing the Colts over pictures that led to her dismissal.

Malori Wampler posed for some pics prior to being a cheerleader that showed her nude, minus some body paint over the good parts.

The lawsuit asserts that Wampler did nothing that many white cheerleaders have done before (she is Indonesian), and that because the pictures were taken prior to her signing an agreement not to create notoriety, she can’t be fired for them.

I googled “Malori Wampler bikini”, and the pic to the left is the best I could find.  Despite an exhaustive search, I found no evidence that the nude photos exist.

The most shocking piece of information in the story is that the Cheerleaders are paid only $100 per game.  What is Lucas Oil Stadium, a Mexican sweat shop/strip club?

The pay for women dancing in bikinis to BTO’s “Taking Care of Business” should at least beat the typical haul for a four-hour shift at PT’s on a Sunday night, and that’s way north of $100, or so I’m told.

Wampler wants the Colts to re-hire her, pay her the couple hundred bucks she lost during the home games she missed after her November canning, and the cost of the lawsuit.  All in, it looks like about $1,000 should shut her up.

Colts owner Jim Irsay should just feed her the answer to one of his Twitter trivia contests, and call it a day.  Oh, and get her to pony up some of those pictures.