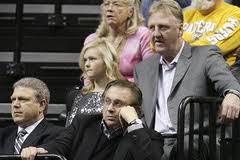 The "Terrible Trio" of David Morway (far left), Herb Simon, and Larry Bird will ride together for another season at least.

The Bird/Simon summit has ended and the status quo has been deemed good enough moving forward for the Indiana Pacers.

The Pacers announced this afternoon that Larry Bird will return as the president of basketball operations, but no contract extension was announced.  David Morway will be back as well in the general manager chair.

In a statement released by the Pacers, owner Herb Simon said, “I’m quite pleased with the success we experienced this past season and pleased with the direction our team is going.  I’m glad Larry is staying to help us continue in the positive direction we are going.”

Bird’s comment – “The past few months have been the most enjoyable since I took over as President of Basketball Operations.  To see our young players develop, to see us make the playoffs and then to see us compete in a hard-fought series with Chicago are indications we are headed in the right direction and it has made me even more determined to help this team improve further and go to the next level.”

The proof as to whether these moves make sense will be in the pudding.  The Pacers were 30th of the 30 NBA teams in attendance, have won 35, 36, 36, 32 and 37 games over the past five years, and while Indianapolis was collectively excited by the Pacers first trip to the playoffs since 2006, it’s hard for some to see 37 wins as worthy of an owner’s confidence.

On the other hand, the past six weeks have been the first breath of positive air to come out of Conseco Fieldhouse since the retirement ceremony of Reggie Miller.  The roster is filled with young talent, and the money coming off the books could give Bird all the ammunition he needs to fortify the roster with veteran talent – if the pending storm clouds of acrimony between the ownership and players results in the prolonged work stoppage many are predicting.

At the very least, the Pacers should be able to look ahead to taking more calls from people buying season tickets than those eager to relinquish them.

The new collective bargaining agreement is going to require blood, sweat, tears, patience, a deadline, and lockout to craft.  NFL teams and players are both making money, and look at that mess.  NBA owners – many of them – are bleeding millions, and they are going to make sure that commissioner David Stern represents them well by getting something done with the long and lucrative guaranteed contracts that reward lazy basketball with CEO type salaries.

If the NBA evolves from a soft cap league into a hard cap similar to the NFL, there will be a period of evolution for many of the teams irretrievably over what the cap number might be.  That could put the Pacers on the outside looking in in dealing with free agents and trades as they are already beneath that number.

Couple that with the fact that players from outside Indianapolis have very little interest in the Circle City as a destination, and the gains possible for the Pacers are limited, regardless of the cap space gained this offseason.

I would argue that Indianapolis is a perfect place for many in the NBA who want the wealth playing in the league provides, while not being bothered by hysterical fans.  A normal life can be led here, and that should be a plus for many.  I’ve seen Peyton Manning, perhaps the most recognizable figure in American sports eat quiet lunches and dinners around town, and never be bothered.

The deals Bird may put together should frighten fans given the near trade to bring perennial bad citizen O.J. Mayo to the Pacers, but maybe God intervened there to save Bird from himself, and he learned his lesson.

There are those who say that Bird and Morway don’t have a clue as to what they are doing, and that Simon is a sports hobbyist too kind to make the tough calls the Pacers need to right themselves.

And then there are others who see the evolution of these young Pacers into a playoff team that battled and almost shocked the Bulls.

One of those two groups is right, and we should know in six months who is right.

Next on Bird’s agenda is figuring out who the coach will be, and I will bet $100 with anyone silly enough to accept that Frank Vogel will be back.