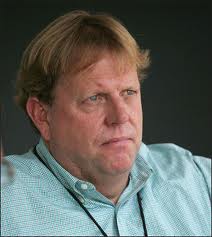 Today, I am announcing the immediate termination of Chicago Cubs general manager Jim Hendry.  Six moving boxes will be delivered to Hendry’s attention at Wrigley Field later today.  He can supply his own tape, or simply fold the flaps to close the boxes after he loads the personal stuff from his office.

Of course, I’m not the owner of the Chicago Cubs, and have no authority to fire Hendry, but something needs to be done, and if all I can do is act in a totally meaningless, futile, and petulant way to make myself feel better about the team I loved first and best that is what I will do.

I have watched too many Cubs games this season to allow the kind of play fans are forced to witness night after night without making some sort of challenge to the status quo.  If that means firing the chief potentate of a team over which I have no authority, I am willing to do it.

The manner in which Hendry preened last night while being quizzed by the media over “the hug” with soon-to-be free agent Albert Pujols was sickening.  You would have thought the Cubs were in first place, playing fundamentally sound baseball, instead of the wretched collection of misfits they are.

The game should have served as a reminder to Hendry that the Cubs roster is a laughingstock filled with overpaid oafs incapable of making routine plays.  Alfonso Soriano is doing the nearly impossible – leading the major leagues in home runs while also killing his team’s chances to win with daily defensive gaffes that would embarrass a 12 year-old.

His thorough lack of defensive ability and erosion of speed make him an $18 million home run slugging albatross around the necks of Hendry and the Cubs.

Koyie Hill as a back-up catcher is only explainable if he was married to a Ricketts.  With Geovany Soto straining a groin last night trying to block a Carlos Zambrano slider, the Cubs are left with Hill as a backstop who might as well stand in the batter’s box holding a guitar as a bat.  He’s hitting .125, which means he’s hot.

Mike Quade was the guy who was supposed to hold players accountable for mopery.  So far, he’s made Lou Piniella’s leadership last year look effective.  If anything, the Cubs appear to care less than in 2010, which isn’t easy.  They’re just short of a quarter through his first full season, but it might be time to start comparing Quade with Jim Essian, Lee Elia, and Jim Marshall in the race for worst manager of the past 45 years.

And how about Kosuke Fukudome?  He’s hitting .341 with a .445 on base percentage, but in reaching base 45 times, he has managed to score an incredibly anemic six runs.  I’ve never heard of a lead off man scoring only 15% of the times he reaches base.  Scoring on 15% of plate appearances would be pretty good.

If you think Fukudome is disappointing, look at his $14 million brother Aramis Ramirez.  Not only is his range at third limited to within a two foot radius of where he holds his glove when the batter makes contact, this cleanup hitter – while hitting .286 – has a slugging average of .373.  Unless he gets hotter than hell, Ramirez will be the first player in major league history to see his slugging average fall from the previous year for seven straight seasons.  By the way, he’s on a pace to score a whopping 34 runs.

It’s easy to look at the injuries to Randy Wells and Andrew Cashner as contributing factors in the early season failures of the Cubs to win, but the “Big Three” of Ryan Dempster, Carlos Zambrano, and Matt Garza are a combined 6-9, while the rest of the staff is 9-10.

While the ever-shrewd Hendry was negotiating to bring Carlos Pena over to the north side as a free agent, hoping he could improve on his 2010 .198 batting average for $10 million (he has, and is now hitting a comparatively robust .213), Hendry put together a collection of pitching depth that has resulted in James Russell being the fifth starter.  As much as Koyie Hill is a virtual pitcher at the plate, Russell pitches like a hitter.  He gives up more than one earned run per inning in his starts, and is a lock to lose every game in which he takes the ball.

The Cubs have no team speed, no power at all (minus Soriano), and fundamental lapses that boggle the mind.

I’m concerned for the collective sanity of the Ricketts, who continue to smile and shake hands with fans as this franchise unravels before their very eyes.  Nero was a better ruler.

This is what happens when the attention of the guy in charge is focus on ancillary revenue streams like the Triangle Building rather than the on-field product that makes the turnstyles spin.  Last night’s rivalry game against the Cardinals sold only 34,249 tickets, and far less than that actually showed up.

This team is a nightmarish 34 games into the season, and for that reason, I’m firing Jim Hendry and hiring Pat Gillick as the team president, replacing both Hendry and Crane Kenney, who I would also fire if I knew what the hell he looked like.  Someone who knows Kenney can fire him in my stead.

Someone needs to lead the Cubs out of this abyss, and not owning a single share of stock in the franchise isn’t going to stop me from doing what needs to be done.

I’ve ordered six boxes from a local U-Haul dealership in Lincoln Park that will be delivered to Wrigley Field this afternoon that will help Jim Hendry pack his personal stuff.