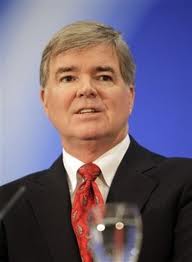 Yesterday, the NCAA hosted a bunch of media types for a day of inculcation into the grim world of NCAA enforcement.  The idea being that them folks who criticize the NCAA ought to at least know how the hell the process works.

Mark Emmert has been the president of the NCAA for under a year, and hasn’t had the time to change the culture, so there is still hope that he can spin that aircraft carrier of an organization on to the path of righteousness rather than subservience to its members.

The evidence of change doesn’t exist – not yet – but that doesn’t mean there is no hope.

As Ohio State revealed the problem coach Jim Tressel knew existed for a half-year not long before the Sugar Bowl, the NCAA agreed to allow the players involved to compete in the game in part because of the lobbying of Big Ten commissioner Jim Delany.  They, along with Tressel will be suspended for the first five games of the 2011 season.  Not playing against Akron, Toledo, Miami (FL), Colorado, and Michigan State isn’t going to dissuade anyone from selling their memorabilia.

UConn committed major violations in recruiting, and then went on to win the NCAA Basketball Tournament.

Had Tennessee not belatedly stepped up and fired basketball coach Bruce Pearl, he would still be the coach, despite lying to the face of NCAA investigators, and then admitting he lied.

That’s not the beginning of a legacy of change, but turning takes time, and perhaps Emmert is going to back up his tough talk.  His latest comment is typical of the rhetoric if not the action he has employed since deciding to leave the University of Washington,  “We need to make sure our penalty structure and enforcement process imposes a thoughtful level of concern, and that the cost of violating the rules costs more than not violating them.”

The NCAA has been resolutely ineffective in enforcing the rules governing college athletics since they opened their doors more than a century ago.  Countless movies about corruption in college athletics have been made, dating all the way back to and beyond The Marx Brothers “Monkey Business”.

Men geared to answer all challenges to win at all costs are not going to abide by rules that might get them to the Final Four or a BCS bowl game unless the penalty for being caught is so severe that their ability to make a living as a coach would be cast into peril.

That means if coaches bring a knife, the NCAA will bring a gun, and the guy holding the gun needs to be both angry and fidgety.  Here’s a clip about what should be the NCAA way:

Here are the measures necessary to give the rules some bite:

And they need to completely replate the rule book.  Right now – it’s thick, confusing, and filled with difficult or impossible to enforce codicils.

The NCAA needs to stop talking and spinning, and start acting.  One coach needs to be the guy that steps in a deep pile, and is hit so hard that every coach feels it, and then it needs to happen again and again.

What happened to Kelvin Sampson and Rob Senderoff after the NCAA brought sanctions against Indiana University wouldn’t put fear into Nathan Thurm.

Sampson took his buyout, ran to the NBA, and earned more serious cash without missing a beat, and Senderoff incredibly is the new head coach at Kent State University.  If the level of pain to be inflicted by the NCAA for the Ohio State mess and UConn silliness doesn’t trump the soft landing given to Sampson and Senderoff, then Emmert would do us all a favor by shredding the rule book and telling the enforcement staff its efforts are no longer needed.

Hopefully, Emmert’s bite is a serious as his bark.  Student-athletes deserve a level playing field, and to be led by men who are as interested in building character as they are in getting rich for winning championships on the shoulders of what they view as cogs in a machine.

We’re going to find out before the end of the year as the NCAA metes out Emmert style justice on Tennessee, Pearl, Ohio State, and Tressel.  My fingers are crossed this is the guy to get it right.

One thought on “Is NCAA President Mark Emmert for Real?”