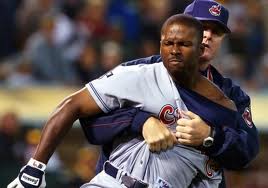 When the Seattle Mariners dumped the occasionally talented but always psychotic Milton Bradley this week, it marked the end of end era for both the Seattle Mariners and Chicago Cubs as both players in one of the silliest trades in baseball history had been cast aside despite their teams being on the hook for the balance of their preposterous salaries.

The Cubs signed Bradley before the 2009 season as a free agent in a backloaded deal that paid him $30 million that was the result of a career year Bradley had going into free agency – never seen Hendry duped that way before, have we?.  Bradley hit .321, with 22 homers, 77 RBIs, and a league leading on base percentage (.436) and OPS (.999).

In 12 major league seasons for eight teams, Bradley has played in 100 or more games only four times.  He wore out his welcome in Chicago very quickly, finally forcing the front office to tell him to leave during meaningless September games.

The Mariners signed the mercurial Silva to an even worse deal based on four years with the Minnesota Twins, when he went 47-45.  In his first season with the Mariners, Silva repaid the franchise who lavished a deal for $47 million on him (without the $12 million mutual option for 2012, but plus the $2 million buyout).

The trade from hell was consummated on December 18, 2009, as an early Christmas present for no one, and both players fulfilled the nightmare scenario that everyone but the GMs predicted.  Bradley hit .209 for the Mariners before being released after two suspensions in the first month of this season.  Silva was good prior to the all-star break, starting 8-1 before an injury followed by a heart issue ended his season with a 10-6 record and 4.22 ERA.

This spring Silva threw batting practice to opponents, and nearly got in a fistfight with Aramis Ramirez before blaming fielding for all his woes.  [Note to Cubs pitchers – blaming bad defense for a poor performance can get old in Chicago.  The expectation should be bad defense.]

So both men are now at home counting their money.  Bradley has already burned bridges with 27% of all potential major league employers, so his career is likely over barring a miraculous advancement in psychological treatments that might get Milton to look in the mirror and see the anger that has caused teams to decide not to enjoy the fruits of his talent.

Silva can eat innings, (and doughnuts by the dozen if his suit size of 56 long is any indication), and someone might be desperate enough to trot him out to the bump again.

When the big book of terrible trades is written, all but one will feature deals like Lou Brock for Ernie Broglio and Ryne Sandberg and Larry Bowa from Ivan DeJesus when one team got a great deal, and the other got bit.

That one trade where both teams somehow got screwed will be Carlos Silva for Milton Bradley.  Only Jim Hendry and Jack Zduriencik could make this deal.

[editor’s note:  It has been correctly pointed out that Silva is not at home counting his money.  He is counting his money while pitching in high-A ball for the New York Yankees.  To date, he has thrown seven innings over two games, giving up eight hits and two runs to 20 year-olds.]