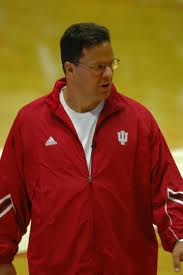 Tom Crean is rolling.  The years of building relationships with summer and high school coaches, and families around Indiana is paying off.  The result is a 2012 recruiting class that Rivals has named the best in the country.

Already committed are (with Rivals ranking in parentheses):

Waiting in the wings are uncommitted recruits like Hamilton Southeastern’s Gary Harris (#26) and North Central’s (but headed to Oak Hill Academy next year) D’Vauntes Smith Rivera (#21).  Seven-footer Kaleb Tarczewski and 6’10” Mitch McGary have offers from IU, according to Rivals, but I’ve not heard of any serious interest from either.

This is the watershed class that Hoosiers fans have waited for, and the wait will continue for one more year.  But the light at the end of the tunnel keeps getting a little brighter.

Rankings are a decent ballpark estimate of the potential kids have shown, but are more than fallible.  I’ve seen all those kids quite a bit, and would adjust the rankings.

Perea scored four points at Bloomington South last year, and the 15th best player in the country ought to be more productive than that, even with triple teams shadowing him everywhere.  Jeremy Hollowell can look disinterested, and while his former and supposedly less talented summer team is taking home trophies, the team with all the IU commits loses.

I believe Ferrell and Harris are ranked beneath than their play, so it will probably all come out in the wash.

Physically, 7’0″ albatross Jurkin is very similar to JaJuan Johnson at the same point in their development, but the question that needs to be answered is whether Jurkin has JJ’s ability to listen and passionately work on his game.

These kids will have a little time to develop as IU will have a number of players, who if healthy, are going to be able to carry some of the load themselves while the freshmen get their sea legs.  Maurice Creek, Christian Watford, and Jordan Hulls will be seniors.  Victor Oladipo and Will Sheehey will be juniors, and Cody Zeller and Austin Etherington sophs.  That’s a nice roster – minus the lack of a big man.

Indiana and Crean are entering a critical stretch of time in the evolution of the Hoosiers program.  All but the easily disenchanted remain patient, and are willing to wait for the nation’s best recruiting class to play for a year before casting judgment on the Crean Era.

Whether Indiana is successful will always depend upon the strength of the in-state players available to Crean.  IU is not a national program like Kentucky, and it’s doubtful it ever becomes one.

Bob Knight’s teams were best when the in-state talent was best.  He was able to grab some kids from Ohio and Illinois as well.  When players from that area were outstanding, Indiana won championships.  When IU left the midwest to grab kids, the results didn’t hang banners.

Purdue rebuilt its program with kids starting with the great bounty of the 2007 high school class, and 2012 looks to be that next great group of Indiana basketball excellence.

From day one on the job at IU, Crean has worked his ass off to generate relationships that would allow him into the homes of Indiana’s best, and those relationships are paying off, along with the facility upgrades IU has made.

The academic facilities and construction of Cook Hall have made a huge impact, as has the development of the Excellence Academy that parents love as a difference maker.  That Indiana cares enough about its athletes to invest this heavily in the development of young men and women, rather than simply finding methods to keep them eligible and get them through so the program’s APR doesn’t drop is a big deal – maybe not for all the kids, but smart parents embrace it.

At some point the lost horizon of the fading past and relentlessly approaching future needs to become the current reality, but for the moment, shangri la appears to be approaching.