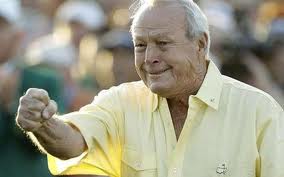 This was Arnold Palmer last year after running in a long putt.

There are very few truly transformative athletes in the history of sports.  Babe Ruth, Wilt Chamberlain, Jackie Robinson, Muhammed Ali, and Arnold Palmer are the five that immediately come to mind, and Palmer is the only one who can still play the game he transformed.

The King was back at Augusta National today giving it a go at the Par Three Tournament that is always held the day before the competition begins in earnest at The Masters.

Palmer won The Masters four times every other year from 1958 through 1964, and his excellence coupled with his charisma took golf from a country club game for the elite to a pastime for the masses.

It’s tough for anyone under the age of 50 to remember Palmer winning his last PGA tour title at the 1973 Bob Hope.  Hell, people under 30 have no idea who Hope was, and many have no inkling that an Arnold Palmer is something other than a half lemonade/half iced tea.

They watch the old guy ambling along the hilly par three course, and listen to their elders talk about what a great champion he was and is.  The guy was always tan and so athletic.  He wore very short sleeves and sported some guns, and while he played as well as anyone for a time, it was the emotion he showed that captured the imagination of the entire golf world.

He smiled easily, grimaced angrily, and beamed when he won.  And he was and continues to be exceptionally 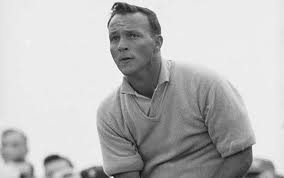 Arnold Palmer in his prime turned watched golf on TV into a good idea.

gracious.  Palmer had a clothing line – one of the first athletes to take in significant cash for endorsements.

Palmer was a blue collar golfer with a “unique” swing who did things the way we would if given the chance.

Now, he’s an amiable past champion who is adored but can no longer compete.  The last time Arnie’s Army got a chance to roar in earnest was at the 1989 PGA when he shot an opening round 68 as he neared his 60th birthday.  The tournament was at Kemper Lakes outside Chicago, and any doubt that the fire continue to burn in Palmer’s belly was put to rest during the post-round press conference.  Some tool asked Palmer whether he thought he could still win.  The glare said all that needed to be said.

The ability to compete may fade, but the desire to win is always just beneath Palmer’s grin.  While we revere and mourn the losses of Ruth, Chamberlain, and Robinson, and grieve for the loss of Ali – both as an athlete and spokesman; we can still see the old guy hit it as well as he can hoping to raise the echoes just one more time.