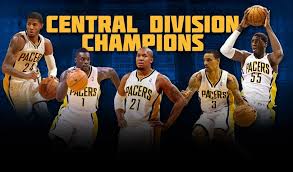 The Pacers won the NBA Central Division for the fifth game since entering the NBA for the 1977 season.

The Indiana Pacers limped into the number three seed of the NBA’s Eastern Conference Playoffs, and it doesn’t matter a damn.  It’s better to be the three seed having lost five of six, than to win six in a row as the four seed – especially if it means playing the Atlanta Hawks in the first round.

If the Pacers lose in the first round, there was something wrong.  If they win, it was a little lapse in effort as the players rested a little bit mentally and physically.

Eighty-one games is a lot of bruising basketball to play in six months.  It’s almost impossible to move through the entire schedule without peaks and valleys.  The only teams that I saw bring it every single night were the 1986 Boston Celtics who lost only one game at home, and the 1996 Chicago Bulls who won 72 games.

The Pacers are a difficult to predict group who lack a star scorer who can be counted on in crunch time to get a big bucket.  Their game is to try to control the pace, and play defense by limiting shots through excellent rebounding.  It’s not sexy, but it is effective.

The salient point for those hoping for a deep run in the playoffs is that the Pacers continue to evolve toward the elite level of the NBA.   The last four seasons, the Pacers have emerged from entrenched mediocrity by posting win totals of 32, 37, 42 (in only 68 games), and 47 games.

Statistics give reason for postseason hope.  The last four times the Pacers had an SRS (a team rating system that takes into account point margin in games and schedule strength where zero is the perfect league average) of over three, they went to the conference finals or finals (1998, 1999, 2000, 2004).  Their rating this year was 3.34.

The only other time in their history the Pacers allowed less than one point per possession was 2004, and they made it to the conference finals.

Their opponent in the first round is the Atlanta Hawks, and I do not like the Hawks because after the 2010 season without justification they fired Mike Woodson, whom I like both as a guy and a coach.  The Hawks fired him after six seasons that each saw the Hawks increase their number of wins (13, 26, 30, 37, 47, and finally 53 in 2010).  They have not won that many since showing him the door.

One area both franchises are very close is in fan apathy.  The Pacers ranked 25th in attendance at 626,069.  The Hawks were 26th at 620,146.  At the very least, it’s unlikely the downtown Indianapolis area and Bankers Life Fieldhouse won’t be besieged by Atlanta fans as would have been the case if the Bulls were the #6 seed.

To be honest, I don’t know much more about the Hawks than you do.  Josh Smith, Al Horford, and Jeff Teague are their studs.  Teague is a very clever point guard who excels at creating space through changing speeds.  He played at Pike High School in Indy, so this will be a homecoming.  In fact, regardless of whether the Hawks or Bulls earned the right to play the Pacers, one of Shawn Teague’s sons would have come home to play the Pacers as younger brother Marquis plays for the Bulls.

The Hawks will also bring with them another player close to the hearts of basketball fans in central Indiana.  Butler product Shelvin Mack is a reserve for the Hawks, but has earned some meaningful minutes late in the season.

As for basketball fans who lapsed into an NBA coma after the Pacers were destroyed in the aftermath of the brawl, now would be a good time to awaken and re-engage.  The Fieldhouse is still the gold standard among all hoop palaces, and the team has a lot of blue collar effort guys who people in this part of the country claim to adore.

The Pacers record zeroed late last night with the end of the regular season and the important basketball of the year will begin Sunday afternoon.  If you missed the earlier 81-game set, now is the time to climb on the bandwagon – for which good seats are available.

Here is the first round schedule: