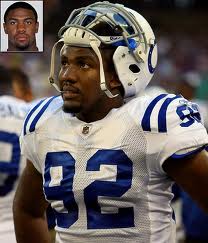 The links to the last three drafts executed by former Indianapolis Colts football czar Bill Polian have dwindled to a precious few, and another one is headed out the door today as the Colts have sent former first rounder Jerry Hughes to the Buffalo Bills for linebacker Kelvin Sheppard.

Hughes came out of TCU as a highly touted pass rush specialist – a great athlete who would be an heir apparent to aging sack master Dwight Freeney.  That never happened, and the Colts finally came to grips with Hughes ultimate production likely falling quite short of his potential.

In three years with the Colts, Hughes started seven games, knocked down ball carriers on his own 31 times, and helped others 20 times.  He planted the quarterback a grand total of five times – not nearly enough for a guy employed to do that specific thing.

This trade acknowledges that the 2010 Draft class for the Colts was a total bust.  In addition to Hughes being a goner, so are third round pick CB Kevin Thomas, fourth rounder (OG) Jacque McClendon, and fifth round TE Brody Eldridge.  Pat Angerer was limited to two starts at linebacker last year after a breakout sophomore season with 146 tackles.

The best player in the draft has been linebacker Kavell Conner with 36 starts in his three seasons in Indy after being taken in the seventh round with the 240th overall pick.  Fellow seventh rounder DL Ricardo Matthews is still with the team, but has seen limited action.

If the 2009 draft was mediocre, it was as much a matter of circumstance than poor evaluation by Polian and his staff.  First rounder RB Donald Brown was followed by DT Fili Moala, CB Jerraud Powers, WR Austin Collier, DT Terrance Taylor, QB Curtis Painter, P Pat McAfee, and OG Jaimie Thomas.  Mostly mediocre guys, with Collie very capable but for a littany of increasinly sad concussions.

The 2011 draft, Polian’s last was a complete catastrophe with only LT Anthony Castonzo as a productive player.

What Sheppard brings to the party is athleticism.  He started every game with the Bills last season, and was a productive player.  The Colts need depth at linebacker and Sheppard will help.

After only 16 months after being shown the door by Colts owner Jim Irsay, Polian wouldn’t recognize too many of the guys running around the 56th Street Complex,  His reputation won’t be damaged badly by what happened in his last three drafts, but if his career as an NFL executive started in 2009, he would not be remembered fondly in Indy.

The Colts continue to pick up decent players, but minus the aging Robert Mathis and a generational franchise quarterback talent in Andrew Luck, they need to hope that in 2013 the whole is greater than the sum of the parts.