College is where minor mistakes in judgment can be made without lifelong consequence, and during a visit to Bloomington today I was reminded of two of them.

I was ruled by my id in college (see I didn’t just sleep during my psych classes!).  If it was fun, I did it.  Studying got in the way occasionally, but for most of my 11 semesters at Indiana University I did what I wanted when I wanted.

For a guy who was passionate about avoiding work, I had a lot of jobs.  During the magical May of 1985, I had a number of jobs and none of those employment opportunities ended happily for me or the business that welcomed me. 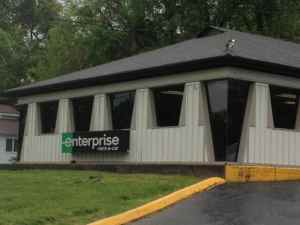 Still looks like a Pizza Hut Hut on the outside, but it’s no filled with eager management trainees rather than ambivalent pizza cooks.

I drove past the former Pizza Hut on North College today and was stunned to see that it has become the home of an Enterprise Rent-a-car.  It still looks like the place where I was the opening cook for all of three weeks.

Opening a restaurant is lonely work.  I got there at 8:00 a.m. every weekday morning and did all the prep work for the day.  I made the crust and sauce from scratch, and got the toppings ready.  That took three hours by myself, and there was nothing terribly challenging about any of it.

It was quiet there – too quiet.  There is something eerie about a restaurant when it’s not open.  There is always some noise in a restaurant – whether it’s in the kitchen or a table of friends talking, or the jukebox, silence is never an option.  At the Pizza Hut, the jukebox would kick on unprompted every 30 minutes, and it scared the hell out of me every time.

You would think I would eventually get used to it, and maybe if I had stayed there a little longer, I would have.  I hated that goddamned thing.

It was ordinary grunt work without any chance for doing anything extraordinary.  Without that challenge, I should have seen boredom coming a mile away.

At 11:00 a.m., everyone else showed up, and I slid over to the cook station as the Pizza Hut opened.  We tried to stay ahead of the game because there was a five-minute lunch guarantee.  Any personal pan pizzas that went unsold were mine to keep, but you would be surprised at how quickly that ceased being a perk.

The end of the third week in the middle of the lunch rush, I decided that gig was no longer interesting.  I told the manager, I was going to take out the garbage, which I did. Then I kept walking until I got back to my apartment.  Julie saw me and said, “What are you doing here?”

I told her I was bored.  Bored and I are not friends.

Oddly, a week later I returned for my final check.  The manager saw me, and appeared one part relieved and another part baffled, “Where have you been?  Why did you leave?”

“I wasn’t having fun anymore,” I told her.

Her eyes almost exploded out of her head, “You weren’t having fun!  What?”

I nodded, she handed me the check and then spun on her heels walking away.  It occurred to me it might have been better to give a couple of weeks notice next time I got bored.

Not quite.  Less than a week later, I was hired to cook more pizzas at the Noble Roman’s about 200 yards north of the Pizza Hut.

That job was a lot more fun.  I got to toss the crusts, and their was a bit more art in cooking those pies in a traditional oven, rather than through the conveyor at Pizza Hut.

I might have stayed there through the end of school if not for a huge party that was planned for a Friday night the following September.  Many of the employees lived in the same Walnut Knolls Apartment building I did, and while the manager was always smart enough to overstaff a little – because who can trust that college students will show up on a weekend night – he was not ready for everyone scheduled to work to not show up.

Walking around the building, seeing all of my Noble Roman’s teammates, we began to ask each other, “If you’re here, who’s working?”  Our interest in pizzas passed quickly as the night went on.

The next day, we found the restaurant locked.  The manager, whose staffed abandoned him in favor of the great party, had packed his stuff and moved back to Cincinnati.  It re-opened in a couple of weeks with an entirely new group of cooks and servers. 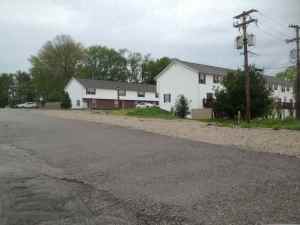 That asphalt is where the kitchen at Noble Roman’s used to be.

Now that place where the mini strip mall that housed the Noble Roman’s is gone, long gone, along with whatever other businesses were in there.

That I became a more responsible and empathetic employee goes without saying, as the bar was low enough it was almost impossible to not clear.  The last person to become aware that when every workday is exactly the same as the one before I do not thrive, I found my way into media where every day is completely unique.

I learned to thank God some people are good with repetition, because I suck at it.  I have Attention Deficit Disorder, and coupled with a raging intolerance of drudgery, I am the worst possible candidate for a dull job.

The best way to get an interesting job is to suck at all the other jobs.  By default, I am a very happy guy working in the media.

The path to what you love sometimes requires a trip through jobs you hate that correct your course.