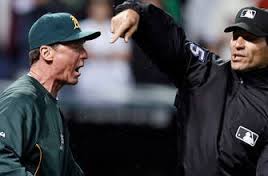 Umpire Angel Hernandez throws A’s Manager Bob Melvin out of the game rather than listen to how he screwed up.

The commissioner of Major League Baseball will turn 80 before he mercifully retires at the end of the 2014 season.  Nothing against Bud Selig, but he’s nearly a half century older than the age of the guy who should have the job.

Technology is evolving every 18 months, as is the market for watching live sporting events.  There is no way for an 80-year-old to begin to grasp how the coveted Men 18-34 demographic consumes media.  It’s not easy for a 35-year-old, but inconceivable for Selig.

ESPN is run by a bunch of people who lead the march to delivering what the sports fan market demands, and if you want to know where baseball falls in the national hierarchy of sports, the Sportscenter rundown is a great place to start.

In the 10a Sportscenter this morning, the first baseball story came at 10:42.  There were countless highlights and Stephen A. Smith appearances to discuss the NBA Playoffs, live shots to Darlington for the Nascar events this weekend, and discussion of the Tiger vs. Sergio pairing at the Players Championship.

The 10:41, fans got some talk about the boos that greeted umpiring pariah Angel Hernandez in Washington, a city that has no dog in the hunt of his blown replay review, but still hates his ass as do all baseball fans.  The ticker still lists the suspension of Fieldin Culbreth for screwing up one of the rules that even passive baseball fans know – that a pitcher cannot be lifting before facing at least one hitter unless injured or ill.

The meaningful highlights were of Shelby Miller and Jon Lester one-hitters.  There was also a look at Tampa Bay Rays pitcher Alex Cobb who recorded 13 of his 14 outs by strikeout.

Attendance isn’t slipping, as baseball posted it’s highest level since 2008 and fifth highest in its history last season.  Trying to figure out what’s happening thus far in 2013 is impossible.  Because of weather and other vagaries, looking at averages through six weeks in comparison to 2012 is difficult.

The problem for baseball is in inducing fans to love the game as they did in the past.  Every time an umpire like Angel Hernandez looks at a replay of a home run, and draws the conclusion that was counter to what the fans at home – and in the stadium for that matter – young people in particular throw up their hands and say, “Dumbasses!”

Ironically, it’s the almost irrelevant NHL who gets their replay system almost entirely right.  There are people sitting in a room in Toronto who screen the replays quickly and efficiently before relaying the findings to the officials in the arena.

That umpires need to walk off the field into a tunnel to stare at a small screen to determine calls MLB deigns as reviewable is absurd given today’s technology.

This is what happens when an 80-year-old runs things, and it represents the technological gap between young consumers and the literal council of elders running the former national pastime.

As with the continued reported death of radio – particularly AM radio – the erosion of audience will be mostly imperceptible for awhile – until it isn’t anymore.

Selig will have gone on to a better place by the time baseball finally succumbs to its need to remain quaint, unless someone who understands how young men consume sports media is hired to replace him.