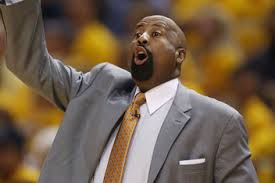 Have you ever had one of those days that start by falling out of bed, and only get worse.

The worst part of the day is that the Knicks again have hope.  They are 48 minutes away from sending this series back to Madison Square Garden for a Game Seven the Pacers have no interest in playing.

The question of what how the Pacers will respond during a close game has yet to be answered in this postseason.  The closest win of the seven wins so far was decided by eight, and the Pacers led that one by 14 with 4:41 to play in the fourth.  The closest loss was by five in tonight’s Game Five.

No Pacers player other than Ian Mahinmi shot 50% or better tonight, and all who attempted a free throw missed one.  Every Pacer but Sam Young notched at least one turnover.

This was a terrible night of basketball for the Pacers, and without any notion as to whether George Hill will be able to play in Saturday night’s Game Six, the Knicks will spend the next 48 hours answering questions about whether they can become the ninth team in NBA history to rally to win three straight after being down 3-1.  The Pacers will be asked about the possibility of being the ninth victim of such a comeback.

The only good news is that the Knicks didn’t play much better that much less bad than the Pacers, shooting 41% from the field and committing 30 fouls.

The Miami Heat are waiting in the wings for the team who survives, and if they watched this game, fear was not instilled.  LeBron and his supporting cast are licking their chops.

Some nights the ball bounces wrong.  Sometimes a key cog has to sit an important game.  Some nights shots don’t fall.  Sometimes fouls that had been play-ons in earlier games are called.  Once in a great while, they all happen on the same night.

If this were the regular season, Frank Vogel would tell his team to forget all about this game and get a good night’s sleep, and they would.  Tonight, he probably told them to put Game Five behind them, but with endless Sportscenter highlights and orgasmic analysis by Stephen A. Smith, this one will be a little harder to wash from the memory.

Saturday night at 8:00p (ESPN), the Pacers get their last best shot to make academic what happened tonight.  They’ve played well enough in three games to advance to the Eastern Conference Finals, but it isn’t over until they do it a fourth time.