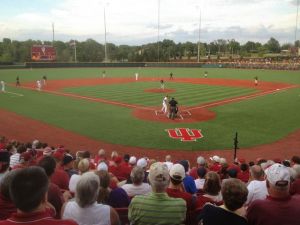 Baseball used to be played at a place called Sembower Field that was only feet away from Foster Quad.  Oddly, it was a hilly field.  Outfielders had to run uphill as they tracked a flyball toward the fence.  The bleachers were standard issue, and watching a guy like Bill Mueller hit bombs or throw out Michigan’s Barry Larkin from behind the plate was about as special as watching intramural softball.

Those days have quickly become a deep and dark memory with the opening of Bart Kaufman Field, which ironically is where the intramural fields used to be near the corner of the Bypass and Fee Lane.

Indiana Baseball is showing off its new home as the host of the NCAA Regional which features the recently crowned Big Ten Champion Indiana Hoosiers.  It had been awhile since IU’s owned a Big Ten regular season crown all by itself – as in all the way back to the Hoover Administration.  Yes, the United States once had a president named Herbert Hoover.  Nice man, but his economic policies extended the Great Depression for a decade.  That title came in 1932.  Players gave each other piggy back rides to get to road games back then.

Tonight, the Hoosiers are playing the Valparaiso Crusaders, who am going to guess won the Horizon League championship, but who can say for sure.  Well, the couple to my right appear to be officials from the Horizon League and would certainly know, but I just don’t care enough to bother/insult them.  The Hoosiers are losing 2-0 in the top of the fourth as I’m writing, but the rain that fell earlier is gone, the sky cleared, and the temperature is right about where we keep the thermostat in our house.

Nothing against the Hoosiers or Crusaders, but the winners watching this game are the fans.  By the way, the Hoosiers are going to win this game.  Valpo’s pitcher throws in 80-poo to borrow a phrase from the great Chris Duncan, and his breaking ball takes a soft left instead of snapping.  Second time around, the Hoosiers will get him.

Games will continue here throughout the weekend, so if the weather cooperates and yoo’re in the area, there is no better way to spend part of the weekend than down in Monroe County watching the prelude to the College World Series.