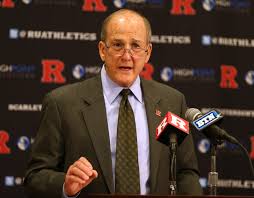 Rutgers President Robert Barchi is the target of the media, not Julie Hermann.  Not sure whether Hermann should feel good about that or not.

Dan Dakich is a great radio host because his genuine curiosity evokes answers that lead to unique opinions.  I spent 90-minutes with Dan today in the 1070 the Fan studio, and he asked me about Rutgers.  The most interesting part of the discussion dealt with journalistic weasels – my term, not Dan’s – and the way they scratch the itch of a story until it bleeds.

Dan wanted to know if I remember all of the weddings that I stood up in, and if I can recall appearing in videos?  The question is relevant in the Julie Hermann/Rutgers flap because Hermann did not recall being in the wedding of the assistant coach she subsequently fired – either for being pregnant or because of poor performance, depending upon who you believe.

I remember all the weddings I have been in, but have no idea what I might have said 16 years ago into a camcorder.  Open bars when I was in my 20s led to many memorable moments of which I thankfully have no recollection.

Would anyone give a damn about Julie Hermann if she was hired as the athletic director at Iowa, Georgia, or Boston College and called members of the volleyball team she coached “Whores, alcoholics, and learning disabled”?  If not for the recent idiocy at Rutgers, would reporters from the Newark Star-Ledger have dug until they found the controversial end of her tenure at Tennessee 16 years ago?   Could they have found the videotape of the wedding Q&A in which Hermann told her assistant not to get pregnant?

Those are damn good questions, and my answer is no to all of them.  Most journalists resemble a hound dog in that they generally lay on the porch until a scent passes across their snout, and then their demeanor changes.  They become engaged, curious, and relentless.

The firing of basketball coach Mike Rice was prompted by videotape being dropped in the lap of the media and led to the firing or forced resignation of Hermann’s predecessor Tim Pernetti, and the next shoe to drop was supposed to be Rutgers President Robert Barchi.  New Jersey Governor Chris Christie pulled the plug with his vote of confidence, but the media wasn’t done.

If Rutgers was dumb enough to keep Rice around despite damning video evidence of his volatile and abusive behavior, surely they can’t be trusted to properly hire another athletic director, so the media went back to work – completing the kind of background check Rutgers probably expected for the $70K fee charged by a firm that does that sort of thing as a business.

And there is only one thing journalists enjoy more than finding a chink in the armor of powerful people, it’s a good game of gotcha.  So the question was asked about the videotape at the press conference where Hermann was introduced as the new AD.  She said, “There’s no videotape, trust me!”

From that point, the game was on.  Every piece of untoward character wrecking dust and grime would be swept from the corners of a life of 49 years that we all have.  It would be poured over and exposed, and we would watch because what’s more fun than seeing the powerful have their careers ended because of their own stupidity.

There aren’t ten coaches in college sports who have treated their student-athletes with the respect they believe is due them.  Kids get pissed.  Things happen.  Hopefully everyone learns.

I’m sure Hermann learned a lot about the line that divides intense and abusive.  As anyone who has ever been in corporate mandated training on harassment can tell you the difference is in the perception of the recipient, not the intent of the manager.

Hermann continues to twist in the wind, saved from national media scrutiny by the inane and humorless babblings of Ohio State President E. Gordon Gee, who is the gift that keeps giving by insulting Catholics, the Polish Army, the Little Sisters of the Poor, Brett Bielema, southerners, the University of Louisville, and others.

The only hope for a woman like Hermann is that someone else will do something dumber before the noise grows to loud for administrators who hate answering accusations where the only logical answers are, “Yes, we are idiots,” or “We are in the process of reviewing the employment of (fill in the soon-to-be-fired employee).”

If it provides any solace to Hermann or a better answer than I provided at the time to Dan, she is in the line of fire, but not the target.  Barchi is the target, and as long as he’s the president at Rutgers, there will be reporters combing over records to uncover additional embarrassing hires, terminations, and misdeeds.

And from a pragmatic perspective, Hermann’s job is among the safest in New Jersey because letting her go would be career suicide for Barchi.  His only answer after the three potholes he has nearly drowned in would be to admit incompetence, and you don’t become a university president by owning errors like these.

11 thoughts on “Rutgers Athletics – Would Anyone Care If Julie Hermann Was Hired Anywhere Else?”