If the Pacers are under the delusion that because they are young, a future of opportunities in the conference finals is assured, they should dispel them.  With Derrick Rose coming back to the Chicago Bulls, Dwyane Wade likely regaining some measure of health, and David West entering free agency, this opportunity needs to be treated as though it may never come again because it may not.

The Pacers need Frank Vogel to channel Billy Bob Thornton in “Friday Night Lights.”  They need to look at each other with clear eyes and love in their hearts.

This isn’t high school, and rah-rah blather is dismissed by most men paid millions of dollars to play a boy’s game, but there is a spiritual element to athletics that can overcome adversity.  A belief in one another, and a love born of a common goal can make dreams come true. 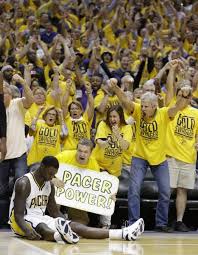 The crowd is going to have to be a force in Game Six to help Lance Stephenson find his inner warrior – the warrior that took Game Fine off.

An NBA Championship has been a dream of the Indiana Pacers since it entered the league, and winning these last two games in the Eastern Conference Finals will take winning two straight against a team that hasn’t lost consecutive games since January 8th and 10th when the Heat lost to the Pacers and Portland.

By any measure, the 2012-2013 season has been a success for the Pacers.  Regardless of what happens Saturday night, earning a berth in the NBA’s final four is a step in the right direction.

There are 13 teams in the Eastern Conference who would be thrilled to swap spots with them.  And the Pacers are very young, with David West as the only active player on the roster over the age of 27.

The Pacers would be justified by claiming victory in the face of what most believed was an inevitable ass-whooping at the hands of the best player in the world, and his friends.

But what kind of man does that?  Competitors compete.  They fight.  They battle.  They make their opponent bleed for  victory.  They stand in front of the oncoming tanks and grimace.  They storm the beach like wild men because the alternative is to cower and abandon brothers.  And they never admit defeat – ever.

The Pacers need to get plum mad dog mean, as Josey Wales tells his ragtag group who believe they are about to face their doom at the hands of the Comanche in “The Outlaw Josey Wales.”  They need to be willing to do whatever it takes.

So what will it take?

Statistics occasionally illuminate, but in the case of Game Six, there are two more esoteric criteria that will determine their fate – faith and diligence.

If the Pacers lapse into a mode where they aren’t clearly focused, LeBron James will make the Pacers pay with points of his own and dimes to Haslem and Mario Chalmers.

This series is still right there for the Pacers to take.  The Heat are little more than what the Cleveland Cavaliers were before James took his talents to Miami – the best player in the world surrounded by a supporting cast that can knock down jumpers and defend.

Chris Bosh has averaged 12.6 ppg and 3.6 rpg, pedestrian numbers for any NBA center. Wade is averaging 15.4 ppg, but doesn’t look anything like the quick footed and explosive future hall of famer that put him on a stage as the Big Three were announced in Miami three years ago.

It’s damn hard to beat a better team in a best-of-seven playoff series, but the Heat are just 48 minutes from getting that job done.  The Pacers need to sack up and take what can be theirs.