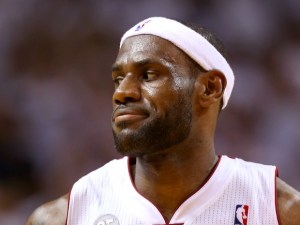 For a full quarter, LeBron James showed why he’s the best in the world. Few have ever played better.

It was right there for the taking.  Control of the Eastern Conference Finals was lazily ceded by the Miami Heat to the Indiana Pacers in the first half, but the Pacers deferred.  Then LeBron James reported for duty with focus, and now they face an elimination game Saturday night at Bankers Life Fieldhouse.

The Heat did everything but gift wrap the first half, but eight turnovers and a lack of production from Lance Stephenson and George Hill kept the Pacers from taking full advantage.

The halftime lead of 44-40 was courtesy of some of the least inspired basketball the Heat have played.  James had 11 points, and Chris Bosh and Dwyane Wade combined for 12.  Either the officials were selectively blind as the Pacers attacked or the Heat never fouled as only two foul shots were awarded to the Pacers because of a foul as they operated on the offensive end.

The other foul shots came as a result of a Chris Anderson flagrant one that was accompanied by a bizarre double technical foul on Anderson for a shove and Tyler Hansbrough for not falling down, as that appeared to be all Hansbrough did wrong.

The second half was a different story.  Champions know when they dodge a bullet, and how to make an opponent pay for their missed opportunity.  By champion, I mean LeBron James, because he either scored or dished for virtually every basket as he outscored the Pacers 16-13 during the third quarter.

The quarter that began with the Pacers holding a tenuous four-point lead ended with Indiana behind by 13.

From that point, the Heat did enough to maintain their lead, and while it’s easy to look at the Big Three (Paul George, David West, and Roy Hibbert) for the Pacers for not doing a lot offensively in the third, Stephenson and Hill are the two factors that can prove most meaningful for the Pacers.  Fans hoping that Good Lance would show up for the biggest game of his life were disappointed.

Bad Lance penetrated and kicked, missed the four shots he took when the game was still in question, and finally scored with 3:46 left, and fouled out with four points with 1:39 remaining.

So the Pacers will look to survive in Game Six, and then return to South Beach for a Game Seven.  It’s an uphill battle as the talking heads remind fans over and over again.  If you don’t know by now that 83% of teams who win Game Five after splitting the first four go on to win the series, activate your closed captioning.

The blueprint for success is the same – all five starters need to play great.  The Heat need one guy to play great and they can stay in any game.  Chalmers and Haslem combined for 28 points while the other two thirds of the Big Three (Bosh and Wade) scored a paltry 17.  None of the Pacers have the luxury of mailing it in if they want an opportunity to beat the Heat.

The search party continues to comb over the wreckage of Chris Bosh to find his game as he delivered seven points and five rebounds.  When Bosh’s combined points and rebounds don’t equal the number of millions he makes every year, that ratio prompts concern, but not for a team with James’ ability to absolutely dominate a game as he did in the third.  Of the 30 points the Heat scored in that awful period, James scored or assisted on 25.

James was a man among boys tonight in a way very few basketball players ever have been.

The series isn’t over, but the road to the finals is now “Ice Road Truckers” dangerous.  If Stephenson and Hill don’t awaked from their slumber, Game Six will be a long night with a heartfelt ovation from the home crowd to salute the Pacers for a season well-fought.  But if they do, and Indiana shows the grit and tenacity they showed in games two and four, the Heat are going to need their savior one more time in Miami to advance to the play the Spurs in yet another best-of-seven.