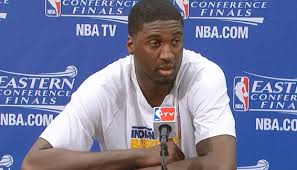 Sometimes professional athletes in front of a microphone forget that they are potentially talking to everyone in the world.  The chances for offending someone exponentially grows depending upon the importance of the event in which they are participating.

The postgame of the Pacers game six win in the Eastern Conference Finals against the most heavily covered team in the NBA is a big event.

In the postgame press conference last night, Indiana Pacers center Roy Hibbert said, “I really felt that I let Paul (George) down in terms of having his back, when LeBron was scoring in the post or getting to the paint because he stretched me out so much, no homo,” Hibbert said.

I was perplexed by the comment, having never heard “No homo” before.  My son told me that “No homo” is a phrase used in locker rooms in the way Michael Scott said “That’s what she said!” on “The Office”.

Or the same person might say it all himself, if he recognizes the double entendre.

In Hibbert’s case, he was praising George with enthusiasm, and used “No homo” to bring what he thought was humor to communicate that while he is a fan of George’s, lust does not accompany his admiration.

Like a lot of what goes on inside the sanctity of the locker room, it’s insensitive, sophomoric, and idiotic.  Whether it’s offensive is defined by those who heard it, and decide to take offense or not.

Beauty is in the eye of the beholder, and so is offensive language.  I’m offended by almost nothing because I accept the brainlessness of society, and their complete inability not to say dopey things.  If people can’t keep from killing each other or stealing each others’ stuff, how in the hell can any of us expect people to be perfect in choosing their words.

Why anyone would choose to be aghast or emotionally tortured because Hibbert said “No homo” is as good a question as asking Hibbert what the hell he was thinking.

Ohio State University President E. Gordon Gee said some equally foolish things in a meeting that was recorded.  Those comments and the recording featuring them were aired last week, and the repercussions were profound.  Speculation from inside the university is that if Gee tries to get clever at someone’s or some group’s expense again, he will either be fired or forced to resign.

Anyone who knows Hibbert is confident that his heart is relatively pure, and that no offense was intended.  Unfortunately for Hibbert, that isn’t the grading scale that counts.  Whether he’s to be held accountable is up to those who heard his words.  Intent is inferred, not implied, meaning that Hibbert and Gee themselves cannot proclaim any meaningful innocence.  It can only be conferred by members of the group who may take umbrage.

Hibbert also used the term “M****r-f****r”, but swearing is usually dismissed pretty quickly unless it slips past the FCC license holders who can be fined a lot of money for allowing that language to leak into the speakers of radios and televisions.  Then, those license holders get pissed.

I would recommend that the people who listened to Hibbert and became hysterical decide that life is better when you accept the stupidity and imperfection of others.  At the same time, people asked to speak publicly need to understand what the precise purpose of all that electronic equipment is – to disseminate their words to a potential audience of billions.

Words can enlighten or they can wound.  Hibbert used locker room vernacular at a presser, and now he’ll pay the price of a fine, and some fleeting scrutiny designed to serve as a significant disincentive for others.

As part of what I’m sure will be an ongoing campaign to mitigate the damage caused by his comments, and to let everyone know that he now gets it, Hibbert released this statement through the Pacers website:

“I am apologizing for insensitive remarks made during the postgame press conference after our victory over Miami Saturday night. They were disrespectful and offensive and not a reflection of my personal views. I used a slang term that is not appropriate in any setting, private or public, and the language I used definitely has no place in a public forum, especially over live television. I apologize to those who I have offended, to our fans and to the Pacers’ organization. I sincerely have deep regret over my choice of words last night.”

12 thoughts on “Roy Hibbert Gay Slur Explained, But Not Excused”