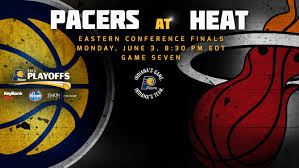 Let’s call this game what it is – a battle of the collective will of the Indiana Pacers against the individual will of the greatest player in the world – LeBron James.

The Big Three has become the Big One as James has outscored Chris Bosh and Dwyane Wade combined 171-155, and the Pacers have threatened to derail the Heat’s plans to repeat as NBA Champions.  Coming off a 66-win regular season and easy series wins against Milwaukee and Chicago, there was discussion about the Heat’s coronation as one of the great teams in NBA history.  Haven’t heard that talk for awhile.

The Pacers have won five of their last nine games against the Heat, and are one more win away from advancing to the NBA Finals against the very well-rested (possibly atrophic) San Antonio Spurs.

The Heat have suffered through what appears to be a serious knee issue for Dwyane Wade, and the malaise of Chris Bosh whose work in this series has been very soft.  Bosh’s game six total of four rebounds actually improved his average for the series.  That is a pretty good indicator of Bosh’s desire to contribute.

Here are the keys for the Pacers to win:

Here is the only key for the Heat:

This is a massive opportunity for the Pacers.  If they play well, the franchise’s second trip to the NBA Finals will be a reality, and with that trip a validation for each of the players of a life’s work trying to build himself into the best basketball player he can be.  But that reward is only attainable through the correct execution of the smallest details.

A loss by the Heat would also serve as a defining moment as they try to craft a legacy.  James desperately wants a team he plays on to join Bill Russell’s Celtics, Magic Johnson’s Lakers, Larry Bird’s Celtics, and Michael Jordan’s Bulls as one of the best to ever play.  A loss tonight corrupts that effort – perhaps irreparably.

Quiet minds succeed during stressful times.  Do your jobs every possession and let the result take care of itself.