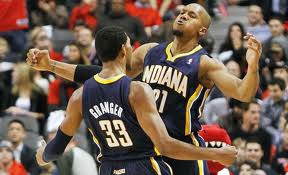 Whether one, both, or neither of these two former all-stars are back for 2013-2014 will be among the big decisions for the Indiana Pacers.

For a team that keeps taking positive strides toward winning a championship, there sure are a bunch of questions about their future.

Power forward David West will be a free agent, and the Pacers will almost certainly try to back back the emotional bellwether for the team.  Until West signed two years ago, the Pacers were young and soft.  Now, they bring a tough-mindedness that they certainly don’t want to cede.

Danny Granger is a different issue.  During his first four seasons, he became the first player in NBA history to improve his points per game average by more than five points in each.  Since then, his average has dropped each year.  He’s under contract through next year, but has great trade value as an expiring contract and rental shooter.

If he stays with the Pacers, Granger could return to the starting lineup as a wing, or be the primary offensive weapon of the second unit.

Then there is the question of Larry Bird’s return to the Pacers front office.  What role would he fill, and how would he fit with the current structure.  The Pacers already have a lot of people with important titles.  Jim Morris is the president, Donnie Walsh is the president of basketball operations, Kevin Pritchard is the general manager, and Cathedral grad Peter Dinwiddie is the vice president of basketball ops.  Maybe Bird could be a special provost or ombudsman.

Here’s a breakdown of each question looming at Bankers Life Fieldhouse:

This is a no brainer.  If West wants to come back, and he says that he does, the Pacers should find a way to get this done.  West has great value as a player and leader at a position where the Pacers have Tyler Hansbrough as the alternative.

I’m not sure there is a bad decision to be made here, if the offers for Granger are reasonable.  If he stays and is healthy, the Pacers are better regardless of whether he comes off the bench or starts.  If he goes, the approximately $12M-$16M is players who bounce to the Pacers will improve the roster.

There are people who say an organization is better off with one bad manager than three good ones.  I think those people are morons.  Putting smart people in a room is always a good idea.  As long as roles are well-defined, the more the merrier.