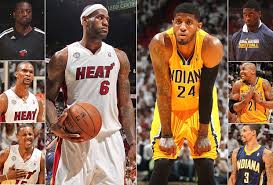 One of the parents of a teammate of my son’s AAU team would come up to me after losses and say, “Hard on my eyes.”  That’s how I felt watching this debacle of a game seven in the Eastern Conference Finals.

There will be plenty of time to reflect on the growth of the Pacers this season – how this team is young and the arc of development is pointing straight up.  All of that is true, but tonight is about tonight.

This was a game where the Heat played a terrible first quarter, and allowed the Pacers to lead by two, despite an incredible nine turnovers.  As Turner analyst Steve Kerr pointed out, “The Pacers are on a pace to commit 36 turnovers and win by eight.”

Dwyane Wade became a productive player again, if not the explosive pre-knee issue guy who has enjoyed a hall of fame career.  Twenty points and nine rebounds was exactly what the Heat needed from him, and with Chris Bosh making only 3-13 of his shots for nine points, the Heat needed Wade tonight.

The Pacers – obviously – had some trouble operating offensively, and had a worse time keeping the Heat off the offensive glass.

To add insult to injury, the Heat made 33-38 free throws compared to 14 for the Pacers.  And where the Pacers had a 44-22 scoring advantage in the paint in game six, tonight the Heat battled to a 30-30 draw.

There was nothing good about the Pacers effort, and the Heat dominated.

The only source of pride was that the Pacers didn’t start headhunting late in the game.  There was a little extracurricular fun between Jeff Pendergraph and Norris Cole that Cole wisely scamped from.  The only real casualty of the fracas was Flo Rida’s manager who engaged Pendergraph in a war of words.

It would have been fun to see the Pacers vanquish this arrogant team.  A little modesty would do LeBron James some good.  He anointed the Heat as a “great team” before the series ever started, and that requires a comeuppance.  Hopefully, the San Antonio Spurs will be able to teach humility to man seemingly bereft of it.

The work the Pacers did will make the offseason shorter – literally and figuratively.  Camp will open in about four months, and between now and then the Pacers have a pretty good idea of what measures need to be taken to continue to narrow the gap between where they were tonight and where they need to be to earn a different result should they reach the conference finals again.

Some nights you get beat, and this was one of them.  The Pacers were 48 minutes away from the NBA Finals when the night began, but they were 17 regular season wins from hosting this game instead of the Heat.  That’s the gap that needs to be closed.

The Pacers were so close, but not really.