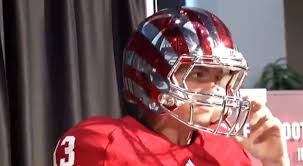 I’m a stickler for uniforms, helmets, and anything else can be a potential embarrassment to a university.  Athletic directors who delve into fashion are a lot like teenage boys picking out a tux for the prom.  Without being cruel, let’s just say that very few guys hold on to their prom pictures.

The gallery of Indiana University football uniforms and helmets are among the worst in the history of college sports.  The 1983 Indiana-in-Motion logo and odd shades of cream and crimson looked worse than the team played, and that’s not an easy claim to make.  There was a rumor that the design made black and white game film useless because the shades of gray for the colors were identical and the numbers were invisible.  Now idea whether that’s true, but I’ve repeated the story hundreds of times as some reflexive defense against attacks on the university where my parents sent too many checks – according to them. 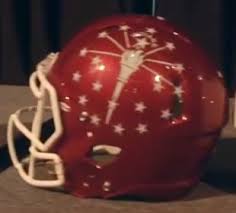 Here’s the Seal of Indiana helmet I prefer.placewhere my parents sent a lot of cash.

When I heard Indiana was going to unveil new helmets to the football team today, I was nervous.  Athletic Director Fred Glass is a good guy with a penchant for doing and saying the right things, but none of that necessarily translates into selecting an iconic look for a helmet.

This image congers many memories – none of them positive. Would have been funny if they had trotted this bad boy out with the new models.

Imagine my surprise with the six helmets that were unveiled today.  There is the block “I” that I have always preferred, an interesting helmet featuring the Seal of Indiana, a white bodied helmet with numbers on the side that is reminiscent of Alabama, a similar colored helmet with the IU logo, a similar helmet to that worn the last few years, and then the boldest among them – a metallic silver and red striped lid that’s a merging of the Oregon look with the candy striped pants of the basketball warm-ups.

My favorite is the Seal of Indiana helmet that I am betting never sees the light of day, and frankly I may like it best just because it took some balls for anyone to commission its creation.

There have been a few attempts do have athletes at Indiana look cool, and most have been miserable failures.  The only logical move has been to adhere to tradition, and Indiana fans like their traditions.  Former basketball coach Mike Davis lost a substantial sect of IU boosters when he dared to suggest putting names on the backs of the jerseys.

A really smart radio guy walked into my office in St. Louis once and said, “All the formattics you’re worried about – don’t.  Getting great ratings is easy.  Just do cool stuff.”

That seems to be the mantra guiding Indiana Athletics these days.  Cool works, and these helmets are cool.  Below is the video of the unveiling.