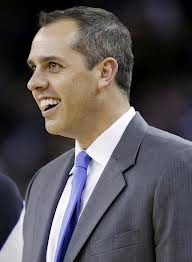 Being a coach must be a horribly lonely existence.  Every time a team plays like crap, bombs are dropped on the coach.  When the team functions well, the players were get the love.

Does anyone give credit to Miami Heat coach Eric Spoelstra for leading LeBron James, Dwyane Wade, and Chris Bosh to the 2012 NBA Championship?  He was seen as a seat filler by many – a guy who fronted for team president Pat Riley, and served more as a cheerleader than coach, but he did something a lot of very good coaches have not – won a title.

Two-thirds of the Big Three for the Heat have been a total mess in this series, headed to a huge game seven tonight, and the talk is about how Wade needs a new knee and Bosh needs a psychiatrist.

Maybe, just maybe, Pacers coach Frank Vogel has a little something to do with the Heat’s struggles.  At the very least, he has a really young team believing that they should win this series.  With the exception of game three and the third quarter of game five, the Pacers have gone toe-to-toe with the defending champions and have come within 48 minutes of reaching the NBA Finals.

Vogel took over a team that was on its way to another mediocre-to-poor season in January, 2011.  The Pacers were 17-27 under Jim O’Brien before he was replaced the 37 year-old coach, who brought some enthusiasm and positive reinforcement to a group of young men who sorely needed it.  The players responded with a 20-18 finish, earning their first playoff berth in five years.

This year, Vogel led the Pacers to a 49-win season, and has moved through two playoff series to make the Eastern Conference Finals for the first time since 2004.  They are hours away from capping off an outstanding seven-game series against the Heat with a road win, or losing and returning to Indianapolis to begin the process of improving for next season.

If they win tonight, the media will spend a lot of time talking about the guys who put the ball in the basket and kept the Heat from doing it.  They will extoll the effort from those who played best – as it should be.

A loss will bring strategic questions from tonight, as well as from the game one decision to keep Roy Hibbert on the bench during the final two defensive possessions, which led to James lay-ups.  There were solid reasons for that strategic move, but coaching is a result based business.  When the result is positive, players are carried off the floor as victors.  When it goes bad, coaches are blamed.  Get blamed enough, and it’s time to look for another gig.

Dan Dakich often says that the best day for a coach is the day he’s hired, and then it’s all downhill from there until the pink slip comes.  That’s true, but a win tonight might make today very special for a guy who appears to have been the absolute right choice 2 1/2 years ago.

How much credit Vogel gets will be less than he deserves because that’s the way life works for coaches.  And he’ll be blamed more than he should be for the same reason.

But he’ll know what he did, and that will have to be enough.

One thought on “Indiana Pacers – How Much of the Pacers Success Is Owned by Frank Vogel?”