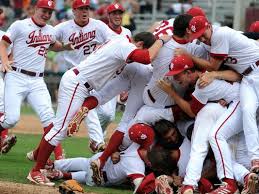 All you need to know about the Indiana vs. Oregon State game tonight at 8p is that the winning team will be very happy, and the losers will go home. The rest just clutters your brain.

My whole life I have tried to learn everything relevant about the games I would watch, so watching a game where I have a rooting interest but no knowledge whatsoever is a joy.

Not only do I know nothing about the team Indiana plays tonight in an elimination game of the College World Series, I have no way to learn.  Oregon State will be the opponent, and aside from the stat page on the Oregon State sports website, there is no information to be gleaned anywhere.

As we have been inundated with minutia about the NBA Finals, and have to suffer through endless inane analysis from men without any real insight at all, tonight we get to watch a game played by entirely anonymous young men who have always dreamed of this moment.

For the same reason, I love watching the girls softball World Series too.  I don’t need to know a damn thing, and there are reminders throughout the game that knowing stuff really doesn’t enhance the enjoyment of watching.

What the hell do I care what the shortstop for Oregon State hits with two outs and runners in scoring position?  It doesn’t matter.  What does matter is the result.  And I don’t need to know whether Indiana or Oregon State is favored.  Sometimes context can get in the way.

That’s a shame because I make my living trying to figure out what’s important in a sporting event, and write or talk about it in an interesting way.

Here’s the story about this game:  two teams will play.  The rules of baseball will be followed.  After nine innings, there will be a winner, and the loser will be driven to the airport to fly home in reflection.

Hell, it’s pretty much the same as every game!

I will root for Indiana because I went to college there and because my son played basketball with starting center fielder Justin Cureton at Cathedral High School.  Sounds like low stress fun.

I love it when sports just washes over us like it will tonight.