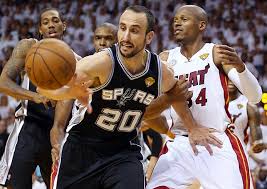 Not sure whether this photo captures a Manu Ginobili turnover from last night, but I wouldn’t bet against it.

Every professional athlete has a moment when he realizes he can’t do what he once did – that the physical gifts that once seemed so much a part of his DNA have eroded to the point where he is now a liability to the team that once counted on his skills.

That moment came last night for San Antonio Spurs wing Manu Ginobili in Game Six of the NBA Finals, and barring a miraculous pivot toward good fortune, his performance will remain etched in his brain as the reason the Spurs don’t return home with their fifth Larry O’Brien Trophy.

There were times during the game he looked like the drummer who filled in for The Who in San Francisco when Keith Moon passed out on stage, except that drummer adequately kept time.  Ginobili was the guy not like the others.  He was slow, weak, and misguided in his choices with the ball.

The plus/minus statistic keeps track of the scoring differential every second each player is in the game, and Ginobili’s plus/minus last night was -21 during his 35 minutes.  Conversely, hall of famer Tim Duncan was a +16 in the three-point overtime loss.

Ginobili’s comment after the game was, “I’m devastated.”  Yep.

The media get to see that devastation after the games in the locker room every once in a while.  Al Harris was one of the best defensive backs in the NFL during the 2000s.  When he tried to come back to play for the St. Louis Rams in 2011 he was exposed as a 36-year-old against the New York Giants.  As the rest of the team showered and dressed after a loss at MetLife Stadium, Harris sat in the locker room, still in pads and jersey, with his head in his hands.  He knew.

Ginobili felt something similar last night after turning the ball over a career high eight times while scoring nine points.  It wasn’t the tonnage of the turnovers, but the timing and the quality that showed every bit of tread off the tires of the soon-to-be 36-year-old.

The three-year extension that Ginobili signed in 2010 expires after this season, so this is likely the last chapter of a Spurs player who helped his team win three NBA Championships.  He might play somewhere again, but it likely will not be in San Antonio, and it won’t dull the memory of last night’s unpleasantness.

The difference between young and old is in the ability to bounce back physically.  Ginobili showed he is capable of brilliance in Game Five when he hit 8-of-14 for 24 points and 10 assists, but repeating excellence as athletes age becomes impossible.

There are others who will willingly share some blame from the media.  Coach Gregg Popovich pulled Duncan twice for Miami offensive possessions in the last :28, and the Spurs gave up crucial offensive rebounds on two missed three-pointers that led to made three-pointers.  I’m certain Popovich would choose to matchup against three-point shooters again, and he would be right to.  The ball caromed to the wrong guy – twice.  That’s bad luck, not bad strategy.

Duncan scored 25 points in the first half on 11-of-13 shooting.  In the second half, he tallied only five points, making 2-of-8 shots  Tony Parker was only 6-of-23 from the field for the game, but holding either accountable for the loss would defy logic.

There are also those who will point to LeBron James triple-double as the reason why the Heat rallied.  The 16 fourth quarter points were instrumental in changing the game, but James didn’t beat the Spurs, and Popovich, Duncan, and Parker didn’t either.

No, sadly, this one belongs to Ginobili, and he’ll carry the lasting memory of this game with him into retirement.

That is unless, somehow, someway, the Spurs find the energy to rally for a Game Seven upset over the Heat that would rival the greatest in the history of sports.

Aging is a bitch for everyone, but to do it as publicly as Ginobili did last night is tragic.