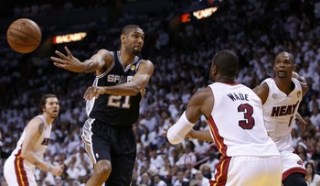 That was a hell of a basketball game that the Miami Heat won 103-100 in overtime.

And then, the Heat finished the job everyone expected them to complete tonight, as they forced a seventh game for the Larry O’Brien Trophy.

There were heroes all over the floor, and there were goats too.  Spurs coach Gregg Popovich made a critical substitution that might have been the play that made the most sense, but cost the Spurs two potential defensive rebounds that led directly to the two three pointers the Heat needed to tie the game.

Hard to criticize Popovich for subbing out Tim Duncan for Boris Diaw as the Heat looked for three pointers while down five and then down three.  Both initial 26-foot three attempts by LeBron James missed, but were rebounded by the Heat.  James hit one of the follow-ups and Ray Allen knocked down the other to tie the game.

Now, we rest up for another late night of hoops.  Can’t wait.