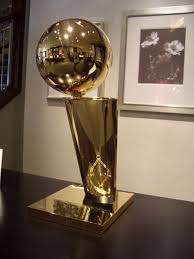 This is what’s at stake for tonight’s winner.

The Spurs chances to win a fifth World Championship were at 98.6% with :28 seconds left in Game Six.  Now, there are a lot of people saying the odds are now reversed in the Heat’s favor.

A lot of good things have to happen for the Spurs to win tonight, and run from South Beach with the Larry O’Brien Trophy in their clutches.

On the plus side for the Spurs, they are 48 minutes away from winning it all.  The Bad is that they were one stop or two free throws away less than 48 hours ago.

More good news for the Spurs, they haven’t followed a loss in the 2013 NBA Playoffs with another loss.  Even better, the Heat haven’t won two in a row since game five of the Bulls series and game one of the Pacers series (seems like three years ago).

Outstanding news for the Spurs – they are 14-3 on the road in potential clinching games.  The awful?  The third loss happened Tuesday.

The Spurs have an experienced and dominant first ballot hall of fame power forward in Tim Duncan who might have a little left in the tank.  Unfortunate that he’s countered by the best player of his generation with an energy pack that never empties.

Basketball isn’t a complicated game – create space offensively, limit second chance points, and take care of the ball.  That is a recipe for winning regardless of the combatants.  The Spurs succeed from possession to possession at doing those three things, they win.

Can’t wait to see if they are able to get that done.