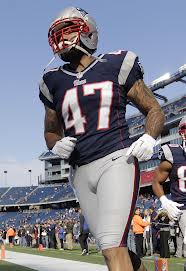 With Patriots tight ends dropping like the recently laid off ESPN statistical gurus, Hoomanawanui is either falling up the depth chart toward a position of significance, or is a short timer at the #1 spot while Bill Belichick searches for options to replace Obama Care’s best customer Rob Gronkowski – who had yet another surgery Tuesday, and Aaron Hernandez – who is being investigated in connection with the execution style murder of Odin Lloyd early Monday.

On today’s show, 1070 the Fan host Dan Dakich said Hernandez has been a “bad guy” since college, where he played for Urban Meyer, a close friend of Dan’s.

The latest on Hernandez is that three cars rented in Hernandez’s name have been searched by police.  One of those cars was found not far from where Lloyd’s body was found.  Another had been returned to an Enterprise rent-a-car branch Tuesday with a broken mirror.

The girlfriend of Lloyd is the sister of the woman with whom Hernandez is living.

In other damning news, Hernandez is being sued by a friend who asserts that he lost his eye after being shot in the face by the tight end after the two visited a Miami strip club in February.

Just as businesses can answer the challenge of maximizing profits by either increasing revenue or decreasing expenses, the trip up and down an NFL franchises depth chart can be made through physical improvement or attrition by those occupying the the spots above.

Regardless, Hoomanawanui’s stock has risen as those above him have faltered.

The soon to be 25-year-old is entering his fourth season as a tight end out of Illinois.  A 2010 fifth round pick of the St. Louis Rams, Hoomanawanui played in St. Louis for two years before being waived by Jeff Fisher.  He signed with the Patriots for 2012, and was re-signed for 2013.

Gronkowski and Hernandez were the best tight end combination in football, and getting on the field at all appeared to be a long shot before injuries and mayhem were inserted into the equation.

Hoomanawanui is likely either hiding in his basement praying that the recent curse plaguing Patriot tight ends doesn’t find him, or he’s in a casino because no one has ever gone from fighting for a roster spot to being an unquestioned starter so quickly, and good luck that profound must be exploited.

It’s possible that Gronkowski will recover from his most recent surgery for the regular season opener, and that Hernandez had nothing to do with Odin’s murder.  Hoomanawanui would resume in his role as blocking tight end, but that sure seems unlikely.

In this even-steven world we live in, bad things for one yields good for another.  That’s an indifferent and pragmatic assessment of life, but it’s undeniable.

If you see Hoomanawanui in a casino, bet like he does.  If you see him alone in a field, scan the skies for a meteor headed for the spot where he’s standing.  And if you are near Ambassador Jones on the streets in Tripoli, run like hell.