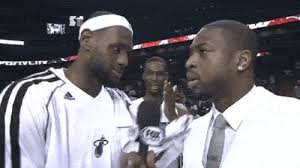 Time for Chris Bosh to shut up.

NBA players in Toronto are harmless.  No one pays any attention, even if they say stupid things.  Forgive me if I missed how self-impressed Chris Bosh was up in the hinterlands of the NBA

Now that he has moved to Miami where microphones and cameras are everywhere, Bosh’s inane chatter is impossible to avoid.  His rants about fatigue and money have outed him as a random access quote machine.  That’s good for the media, but terrible for a temporarily famous fellow who might eventually have to work for an honest wage.

It’s not that Bosh is stupid, he isn’t.  It’s that he just doesn’t  know what consequences exist for saying whatever pops into your head.

When Miami Heat fans decided they didn’t want to watch their team lose to the Spurs, and witness the postgame frivolity associated with the crowning of an NBA Champion on the road, many left prior to the Heat ending the need for any celebration by coming back from a five-point deficit with less than a half-minute to play, Bosh took umbrage, “For all those guys who left, make sure you don’t come to Game 7.”

“We only want the guys who are going to stay in the building for the whole game. You never give up. People gave up on us. They can stay where they are and watch the game at home,” Bosh said.

After a Game Five when Spurs forward Danny Green scored 24 points on 6-10 shooting from beyond the arc – a total Bosh has not reached since March 15th – to run his three-point shooting to 25-38 for the finals, Bosh was asked about Green’s performance.  He answered, “He won’t be open tonight.”

That Bosh was right, and even blocked Green’s attempt to tie the game at the end of overtime, but the confidence rang hollow as Bosh is rarely responsible for defending Green.

There is a tendency for those who crave attention to say silly ill-considered things, and Bosh falls into that category.

There are people in sports who have earned the right to make proclamations on behalf of their team.  Derek Jeter is a guy worth listening to.  LeBron James too.  Tom Brady and Peyton Manning say things worth hearing.  Bosh is not that guy, and will never be that guy.

James, Bosh, and Dwyane Wade are like Jack Nicholson, Jim Belushi, and Robert DeNiro.  If a microphone was thrust into the midst of that trio, you would hope that Belushi would know to defer to the others.

Bosh should concentrate on outplaying someone rather than talking.  Until he can stop Roy Hibbert or Tim Duncan, he should self-impose a media boycott.

He would be better off, and so would we.