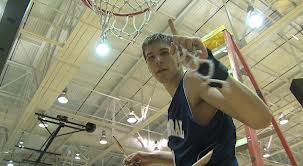 Collin Hartman likes to cut down nets, and did it four times last year for Cathedral.

There are a lot of people who see inkling IU freshman Collin Hartman as the sixth member of a six-man freshman class.  Hartman is not among them.

Cathedral enjoyed his talents for four years as he did a lot of the little things that team needed to win.  The Fighting Irish made it to the Indiana state championship game last March in large part because of Hartman being the glue/shooter/rebounder for the team, and he hopes to do the same in Bloomington starting this fall.

The thing about Collin when you meet him is that he’s confident without arrogance.  He believes in his ability to contribute heavily at IU, understanding that after Jordan Hulls, Victor Oladipo, Cody Zeller, Christian Watford, Remy Abell, Maurice Creek, and Derek Elston said goodbye to the program, someone needs to put the ball in the hoop.  Why not him?

In this video, you get a look at the kind of kid Hartman is, and why the 6’6″ freshman believes he and IU are a perfect fit.