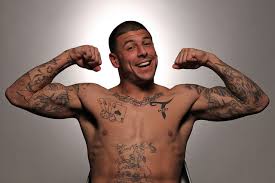 Not sure what the New England Patriots are waiting for.  At the minimum, tight end Aaron Hernandez apparently destroyed his cell phone and security recordings from his home that police wanted to audit as they compile a timeline in the murder of Odin Lloyd.

The maximum is unimportant because a guy who destroys potential evidence in a murder trial is not someone an organization should want to associate with.

There is a saying among some in the NFL that ankle bracelets don’t slow players down, but this isn’t a simple pot or assault bust.  The end of this story is that someone put a bullet in another man’s brain, and anyone who took part in the act or cover up must – at the minimum – forfeit their opportunity to earn major cash as an NFL player and a component in the brand of an NFL franchise and the league itself.

Oddly, according to an nfl.com report from Ian Rapoport, Hernandez may be due a significant part of his money regardless of the outcome of the investigation, or how the Patriots proceed.  There are two clauses that are standard in an NFL contract that simply are not present in the deal that binds Hernandez to the Patriots – and vice versa.

The “failure to perform” or “failure to practice” clauses that allow teams to not pay players if they are not able to practice of play due to disciplinary measures taken by the league or the team don’t exist, so the Pats are on the hook for a substantial bundle of bills regardless of his disposition.

That should in no way prevent the Patriots from doing the right thing – which is to cut this carbuncle loose for the USS Kraft.

This move would be far from disloyal – it would acknowledge that this is just a bad guy who did a terrible thing, if not a series of terrible things.

After all, Hernandez is not just a person of interest or suspect in Lloyd’s murder, he is believed to have destroyed evidence, hired a cleaning crew to detail his house last Monday, and is alleged by the victim to have shot a man in the face while being driven home from a strip club on February 13th.

No Super Bowl victory is worth doing business with a tight end who appears to live his life like Tommy DeVito (Joe Pesci’s character) in “Goodfellas.”

There appears to be no pragmatic penalty for the Patriots in delaying action, but to claim moral high ground by waiting for a legal determination would be ridiculous.  The American system of justice requires a guilty verdict before punishment is meted out, but no such burden is required of an employer.

That Hernandez is a bad guy is beyond dispute, and he should be cut despite the cost because it’s the right thing to do.