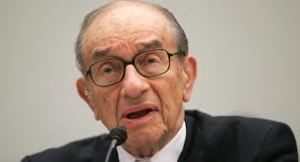 This is Alan Greenspan, perhaps a distant cousin, who got the brains in the family.

We used to joke about a former music radio program director who went to work for a consultant, “He got tired of ruining radio stations one at a time.”  I thought of that joke when I read in the Rice University release announcing the resignation about athletic director Rick Greenspan leaving to “expand his consulting business and explore other professional opportunities that have been presented to him.”

Today is Greenspan’s last scheduled day in the office, and Rice will breathe a significant sigh of relief as he waddles to his car for the last time.

During Greenspan’s three-plus years at Rice, there have been multiple allegations of discrimination against him.

While at Indiana from 2004-2008, Greenspan’s arrogance was his hallmark.  Effective managers surround themselves with smart people, and seek their counsel.  Greenspan, according to those who worked with him at Army, Indiana, and Rice thought he was the smartest person in the room.

And so after Greenspan closes this Rice chapter of his career, he is going to avail his talents to all athletic departments who feel they are in such dire straits they might consider allowing him a seat at the table.

To be fair, Greenspan was adept at both Indiana and Rice at getting construction projects completed.  Plans to build Cook Hall and the closing of the north end zone at Memorial Stadium were initiated at IU under Greenspan’s watch, and at Rice he earned the approval of a $44 million football facility and a new tennis facility.

He will forever be known for hiring Kelvin Sampson to run Indiana’s basketball program into the ground.  Some claim that Sampson’s hire was the work of then university president Adam Herbert, and that may be true, but prior to the announcement to name Sampson, I was in a meeting with Greenspan’s lieutenant Tim Fitzpatrick, and he was giddy that they had landed their whale.

“We got our guy,” Fitzpatrick said excitedly.  I asked who, and he turned his head from side to side for dramatic effect before saying slowly with an ever widening grin, “Kelvin (pause) Sampson!”

I knew that Sampson was in deep trouble at Oklahoma, and struggled to congratulate Tim.  If this was a Herbert hire, Fitzpatrick did an Oscar worthy job of selling Sampson as the absolute choice of the athletic department.

Greenspan also made a disastrous hire at Army, prior to coming to IU. Choosing Todd Berry over Jim Tressel after the 1999 season certainly cemented Greenspan’s role in wrecking Army football.

Hopefully, Greenspan’s consulting business is limited to facilities, and has nothing at all to do with hiring coaches.