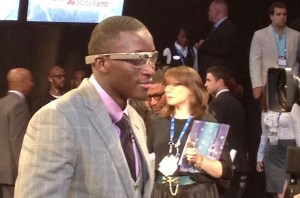 Victor Oladip[o and his pair of Google Glasses were drafted #2 overall, and IU fans want answers to why two top four picks couldn’t move beyond the Sweet Sixteen.

The emails started as soon as Cody Zeller was announced as the fourth overall pick in last night’s NBA Draft.  “How in the hell did the team with the second and fourth best players in college basketball not advance beyond the Sweet Sixteen?”  “Crean had 2 and 4 and same outcome as last year?  Crean has some splainin to do.”  And, “The AD should have asked for Crean’s resignation as soon as Zeller was drafted.”

Not mentioned in those angry emails was that Victor Oladipo came to Indiana as the 144th ranked player in the 2010 high school class, and developed into a guy who could very easily have been drafted first.

Zeller went fourth after spending two years with Crean in Bloomington.  The second year saw Indiana win their first regular season Big Ten title in 20 years before a disappointing finish to the season with early exits in both the Big Ten and NCAA Tournaments.

Indiana University basketball coach Tom Crean and his staff are responsible for a good portion of that development, and the Big Ten title.

Will Sheehey and Yogi Ferrell are both among 16 finalists for the 12-man World University game team, which is also a double-edged sword for Crean depending upon fan’s perspectives.

With two top four draftees and two of the best 16 returnees, crediting Crean with rebuilding the talent pool at Indiana is obvious, but so is assigning some blame for a team that appeared to peak a few weeks prior to March.

The question for Indiana fans who continue to hammer away at the fact that validation of Crean’s reign in Bloomington can only come by hanging a National Championship banner, is what is truly important at IU.  Is it banners, titles, graduation rate, a clean record with the NCAA, or all of the above?

The lack of an NCAA banner is an obvious void, but winning championships is not only hard, it requires good fortune.  The Hoosiers won the Big Ten regular season title, and that far outweighs any glory that would come in the Big Ten Tourney.  For most Indiana fans, the Big Ten Tournament is a sideshow – a money grab by the conference – that is a distraction on the road to the NCAAs.

The graduation rate under Crean is stellar and the NCAA APR has been a perfect 1,000 the last three  years.  Crean’s team APRs (they run a year behind, so we won’t know 2012-2013 scores for another year) have been 975, 1,000, 1,000, and 1,000.  The only blip on the NCAA infractions radar we are aware of was the visit to Hamilton Southeastern High School to see recruit Gary Harris one day after the window for visits closed.  It was minor, and appeared to be unintentional.

Minus the NCAA flame outs (one of which was against the eventual champion Kentucky Wildcats), the results Crean has crafted for the program Kelvin Sampson nearly destroyed with the recruitment of players with serious character issues and arrogant indifference to NCAA rules haven’t brought that elusive sixth banner, but they have returned Indiana to a place of prominence and respect in college basketball.

What high school recruits learned during last night’s draft is that the structure is in place in Bloomington for basketball players to reach their potential and shoot for their dreams, while also achieving academically.  The number of schools where that combination is possible makes for a very short list.  Those who didn’t learn it will definitely be educated by Crean and his staff through the three evaluation periods in July.

For some, that won’t be enough, but it should be.