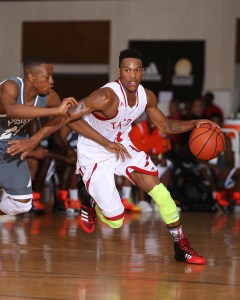 Ahmaad Rorie of Tacoma will go to Cal next fall, but he’ll play here this weekend with his friends.

There is something wonderful about the pomp, circumstance, history, and pride of playing for a high school team.  There is also something magical about the bonds among teammates and thesheer volume of basketball played during the summer on a typical AAU schedule.

[For those trying to figure out whether I write what I believe will gather the most eyes, this post should put that to rest.  It would be much more inflammatory if I trashed either high school or AAU in favor of the other.  Killing high school ball would rile up the anti multi-class bunch in Indiana, and hammering AAU as a rogue led mess run by shoe companies trying to build bonds with adolescents would be equally appealing to those who loathe corruption in college ball.  I will do neither because I love both.]

When a tournament with great players from all over the country comes to Indianapolis, the result can be an uneven mess.  I watched six games yesterday at the Adidas Invitational featuring some of the highest ranked teenage basketball players in the country, and I regretted sitting through all but one.  That game between the Eric Gordon Central Stars and New Heights was a wonderful example of why Indiana sends so many kids to college programs – they know how to adjust and overcome.  EG was down 38-24 early in the second half, made New Heights best player Matt Ryan uncomfortable on offense, and stormed back to win by five.

Summer basketball is not about quality as much as tonnage.  You need to sift through lots of junk to find the magic, and yesterday, there was a lot of junk.  The worst game of the day that I saw was between Compton and Utah.  More a sociology experiment than a basketball game, neither team played well, and what I thought looked like a fun clash of styles wound up being a tedious mess.

But the beautiful part of the summer experience can be the bonds that form among teammates and opponents during the down time.  The kids don’t play more than twice in a day, and that leaves a lot of idle time with nothing to fill it but laying around watching movies, going to the mall, or just sitting around talking.  There is no better petri dish for friendship like six hours to kill.  Multiply that by 11 tournaments played over 40 days, and many of the best friends the kids playing summer ball will ever have are those teammates.

There are a lot of goofballs who put together teams, and they muddy the water a bit, but that’s part of the fun too.  To be a coach, all you need is the ability to convince kids to play for you and some deep pockets to pop for travel, jerseys, food, and lodging.  The rage that parents occasionally feel about the high school experience doesn’t exist in the summer because transferring is as easy as telling your current coach you are through after being asked by another coach to play with his team.

Some think there is a downside to playing so much, but it’s a big plus for the bench players who have to be productive throughout an event if a team playing two games per day is going to compete to win one of these tournaments.  The crazy schedule also provides a stiff physical and mental test.  Unless you love basketball, playing an NBA schedule in six weeks is brutal.

High school basketball games are events with the National Anthem, cheerleaders, fans who aren’t immediate family members, coaches in suits, and a buzz around school.  None of that could exist for AAU teams.  The travel is minimal in high school, and the schedule allows the kids to play at the highest level more often than during the summer because there are rarely more than two games each week (roughly 25% of what is required to win an AAU tournament).

The coaching is better in high school – most of the time, but many of the summer coaches also coach in high school.  The coaches have time to scout and prepare for an opponent in a way that would be impossible in the summer when you don’t know you you will play until another game ends an hour before you get them.

The rich tradition that exists for high school basketball in Indiana is nowhere to be found in the summer, but the quality of teams is more often than not determined by geography.  Where a kid lives generally determines where he goes to high school – except at Lawrence North, but that’s a topic for an entirely different column.

My son played both summer and high school ball, and enjoyed both immensely.  The trips around the country doubled as family vacations, and we were lucky to be able to watch a selfless group of kids who loved each other compete at the highest level.  The best basketball game I have ever seen played by high school age kids was in the AAU State Finals between my son’s team and Team SYF prior to their senior years.  We had Matt Howard, Zach Hahn, JaJuan Johnson, Nate Blank, Joe Hughes, Kyle Miller, Terran Bibbs, and several other kids, and they had Robbie Hummel, Scott Martin, Gary McGhee, Antwan Boyd, and more.

From the tip, the two teams went at each other with ferocity.  They couldn’t have played harder if there had been 18,000 fans in the gym.  Neither team could create separation, but in the end our team won.  The postgame behavior of both groups was no less dramatic than if they had played in the IHSAA State Finals.  After that game, their was no doubt that the kids on both teams would go on to do special things.

They battled because they loved basketball and their teammates, and while that doesn’t happen all that often on AAU teams, it’s worth sorting through the ordinary to find the special teams so you get to watch it for yourself.

And that’s what I’m doing this weekend at the Adidas Invitational.