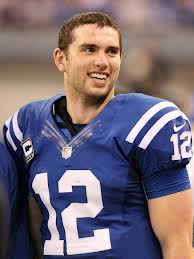 One of the only things I’ve learned at Indianapolis Colts Training Camp is that their quarterback, the 2012 #1 overall pick in the draft, is the real deal.  Andrew Luck has all the traits of an exceptionally talented player in the NFL.

I’ve stared at Luck during workouts in Anderson during training camp until I felt like a creep in a schoolyard, and never did his enthusiasm waver.  Not once.  Through every snap, the guy is totally keyed in and ready to execute.  I’ve watched and re-watched every snap Luck took last year, and not once did he take a play off.

At a celebrity softball game to benefit the Indiana Children’s Wish Fund eight weeks ago, Luck not only played but led his team.  He was relentlessly enthusiastic, and as silly as it sounds, he elevated the play of his teammates.

There are tangibles that statistician-types cite in grading quarterbacks that paint Luck in a less than positive light, and these analysts should be ignored by fans because the sum of the numbers don’t equal the whole of the quarterback.  There are some quarterbacks that can be painted as excellent through stats who never win a thing, and others who win a lot with some goofy looking numbers.  Jay Cutler is a good example of the former while Luck is definitely in the latter.

Here are five numbers that are meaningless:

14 – That is the number of dropped interceptions Luck threw is 2012.  If statcentric kooks are going to add the dropped picks to Luck’s total, they should also add the 61 misses that were directed to Donnie Avery to Luck’s completions.  Yeah, Luck might have been fortunate a few times when he tried to force passes into tight spots, but how many of those risky passes were caught for gains that led to points that won close games.

9-1 – People are citing the Colts record in one possession games as a reason for their likely recession to the mean.  The Colts didn’t win nine of ten close games because they had a hot streak at a roulette table.  They won because Luck and the Colts found a way to score last.  That’s what wins games.  It wasn’t luck – it was Luck.

122 – Luck got hit that many times last season, and that’s a lot of punishment to take during an NFL season, and while no one wants Luck to get hit that many times in 2013, especially Luck, he was athletic enough to avoid meaningful injury from any of them.  That’s an outstanding ratio of zero injuries to 122 wallops.  Luck was superb at evading direct contact, and that’s the key to avoiding injury.

41 – Yes, Luck was sacked often, but how many plays did he prolong at his own peril without being sacked that led to plays that helped lead to that 9-1 record in one possession games?  The stat guys want fans to downgrade Luck as a quarterback because of 41 negative events when that same competitiveness led to hundreds of positive, game-changing plays.  You know who led the NFL in sacks and yards lost as a result?  Aaron Rodgers.  Case closed.

54.1% – Luck didn’t wow the NFL with his completion percentage, but that number is more germane to the scheme.  The longer the pass, the less likely it will be completed.  The Colts threw the ball deep.  Luck is a winning quarterback, and it’s not always pretty.  It doesn’t need to be.  Beating the Houston Texans doesn’t require 80% of Luck’s passes to be caught – just the right ones.

Here’s a number for you.  7.  That’s the number of game-winning drives to which Luck led the Colts, and that places him 25th all-time in career comebacks – after only one season.  16 starts, and Luck ranks among the top 25 in comebacks..  He is a game-changer who cannot be evaluated through statistics.  I love numbers and use them often, but his best work does not show up on pro-football-reference.com.

Indianapolis has been very fortunate to be the home for two very different but great quarterbacks.  Peyton Manning is without peer as a builder of an excellent stat sheet.  He won in the regular season at an unequaled rate.  Andrew Luck is a different kind of guy.  He’s physically gifted, and can make all the throws, but he’s a gunslinger who can win games through different means.

Luck is an amalgam of many of the best who have ever played.  There is some Favre in there, some Manning, and some Roethlisberger.  Stir it all up and it’s one hell of a potLuck stew.