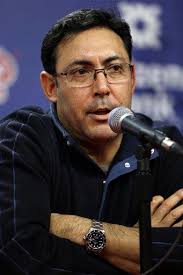 Looks like Ruben Amaro Jr. has been studying the Cubs playbook for filling limited expectations.

General managers rarely fire themselves, even when it’s the most obvious answer for the failings of a major league baseball team.  Ruben Amaro Jr. didn’t disappoint in that regard today when he punted longtime Philles manager Charlie Manuel.

Manuel was smart enough to lead the Phillies to five straight National League East titles from 2007-2011, but someone evidently will be better at leading a less talented team to fewer wins.  That’s the kind of circuitous logic that GMs like Amaro spout at meetings around long tables surrounded by yes man in expensive suits.

“Charlie is a great manager.  We all love Charlie.  But his temperament is not conducive to developing the young core of talent that will serve as the nucleus of the Philadelphia Phillies as we rebuild.  We need a person more tolerant of miscues, mistakes, and missteps.  I propose we ante up Ryne Sandberg to the alter of the God of perpetual defeat!”

That’s how a manager as good as Manuel gets the ax less than two years after losing one of the best games in postseason history to the St. Louis Cardinals.  Had Rafael Furcal not tripled to start the game, we might be talking about the Phillies as 2011 World Champions instead of the Cardinals.

So the guy who assembled a team that failed gets to come to work again tomorrow, and the guy who had to play the cards dealt to him takes a career dirt nap.

That makes as much sense as the Chicago Cubs passing on Ryne Sandberg prior to the 2011 season in favor of Mike Quade.  Cubs fans were either outraged because Samdberg earned his shot by winning at every level in the Cubs farm system, or were thrilled because their hero wasn’t appointed to the position as the guy who would guide the Cubs to the bottom of a very deep cavern.

That’s the logic that keeps the Cubs in their rightful position as professional sports’ laughing stock.  Hire the less qualified guy because it’s not fair to the more qualified guy to be sentence to fulfilling the responsibilities of the position.  Hello, cellar!

The Phillies will get the best Sandberg has because that’s who he is, just as they got the best of a very good manager in Manuel.

I wonder if the Philadelphia media will buy into this protracted process with the same enthusiasm the Chicago media has.

Maybe Amaro is a hell of a lot smarter than he is given credit for.

As the Cubs brain trust of Theo Epstein and Jed Hoyer have longterm contracts that pay them handsomely.  Because Cubs Owner Tom Ricketts and the media have bought into this lunacy of a five or six year rebuilding plan, expectations for the team are to win 70 wins for the next three years (they have already completed the first and most of a second).

There is no better way to assure job security than to lower expectations to the point where not reaching them is impossible.  Amaro may have taken a page out of the Theo/Jed handbook, and firing the prickly-when-losing and honest-to-a-fault Manuel is a way to control the message of “70 wins in 2014, 2015, and 2016 will pave the way for a generation of excellence.”

That should keep the paychecks coming for Amaro for years.

The only flaw in the system is that if it’s adopted by everyone, somebody is going to have to succeed, as it’s mathematically impossible for all 30 MLB teams to go 70-92.  And then the jig is up.  Winning builds hope, and GMs lose their jobs at the intersection of hopes shattered and expectations unfulfilled.