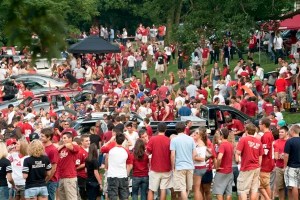 If IU AD and football coach Kevin Wilson, all these people will have good reason to take their party into Memorial Stadium.

If I recall correctly from my extended stay as a student on Bloomington Campus of Indiana University, the powers that be do not condone cheating.  The only class in which I took such liberties was Geology, and that was only because it was a rite of passage at the time.

For those who will attend the Indiana vs. Indiana State fracas on Thursday, you will likely require the use of a cheat sheet to behave with the uniform enthusiasm for which the athletic department is striving.  There will also be some video help, and because there is no way to fail as a football fan, cheating is encouraged.

Because we aim to meet the market demand for such items at kentsterling.com, please feel free to clip and save this invaluable primer:

There are also some statistical thresholds that will earn discounts:

A couple of more items to look forward to:

Not too complicated, but a little different, and more fun.  Memorial Stadium has never been a den of iniquity for opponents, and hopefully these efforts will help facilitate making it an inhospitable destination for opponents much as many other stadia are.

Getting off to a good start Thursday night and throughout the rest of the first five games – all of which are at home would help build enthusiasm in ways these devices can’t.  The goal is to fill the place for games other than Ohio State’s visit, and making the game experience more fun is a great start.

The key will be what happens between the lines.