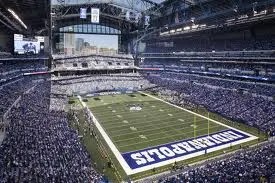 The best place to sit during a Colts game is in the sun when the roof’s open, and if Dan Guiser doesn’t like it, he should watch the game on TV.

“And the heat – my God, the heat!” Elaine Benes of “Seinfeld” on the chief problem she would have with her soul being consigned to hell.

Dan Guiser, who wrote a letter published this morning in the Indianapolis Star whining about the heat in the sun when the roof of Lucas Oil Stadium is open during Colts games would happily nod his agreement with Elaine.

“I invite those who make the decision to open the roof when it’s sunny and 80-plus degrees out to come out of the air conditioned suites or press box and come down to the to the main entrance end zone area,” writes Guiser.

You know what, they don’t have to because outdoors exists everywhere that is not indoors.  They could walk down the street, mow the lawn, or have a picnic.  They could go to Cincinnati and sit in any seat in the roofless stadium.  They could watch football at Ross-Ade Stadium at Purdue or Memorial Stadium at Indiana.

Yes, the conditions occasionally exist in the outdoors where a human being’s cooling system will be activated and perspiration will occur.

What a bunch of tools we’ve become where complaining about a less than perfect environment is a reason for a man to sit down and pen a letter about the impossibility of enjoying a sporting event played outdoors.

A football stadium is not a hotel room where an expectation of a perfect climate is warranted.  This is a place for men to test their physicality, fitness, and athleticism.  Guiser sounds like the kind of guy who needs a little more exposure to the elements – not less.

My season tickets were in section 153 for the first three years the stadium was open.  That’s smack in the middle of the sun area of which Guiser complains.  Yeah, it was a little warm – and I loved it.  It’s good to sweat.  It’s good to be outdoors.  It’s good to enjoy a warm afternoon in the elements.

My only regret in the construction of Lucas Oil Stadium is that there is a roof at all.  Sports are more fun to watch in the rain, snow, heat, and cold.  Fans don’t need perfect comfort.  Fans need perfect on-field execution.

Guiser should spend some summer afternoons at Busch Stadium in St. Louis, Great American Ballpark in Cincinnati, or Wrigley Field in Chicago during the middle of July when the thermometer tops 90 under a cloudless sky.  That will make Lucas Oil at 80-degrees feel like that hotel room atmosphere he so loudly craves.

Or like my wife said after reading his letter, “That boob should go to a Dolphins game and sweat his ass off down there!”  My wife is big on the old, there is always a worse place to be perspective, and Guiser could use a little time in Julie’s circumspect world rather than his myopic and whiny mental clubhouse.

You know who complains about the heat in those three stadia?  No one.  They grab another beer (not the best remedy for the heat, according to doctors, but what do they know?) and enjoy the day.  And that’s what Gulser should do.

Sack up, be a man, and enjoy a little sweaty fun.