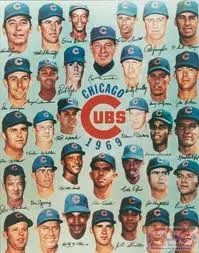 After 24 years of mediocrity, the Chicago Cubs were on the precipice of doing what many thought impossible – win.

1969 was the first year of division play in Major League Baseball, and the Cubs appeared ready to take advantage of the new construct to beat five other teams rather than nine to advance to the postseason for the first time since losing the 1945 World Series in seven games to the Detroit Tigers.

The 1969 Cubs were a happy group who took a city’s mind off Vietnam, Nixon, inflation, assassinations, the trial of the Chicago Seven, and all manner of unpleasantness that dominated the news.  There was less Len O’Connor and more Wendell Smith on WGN-TV News through that summer of grace.

Ron Santo clicked his heels every time the Cubs won a home game, and manager Leo Durocher ranted at umpire Shag Crawford until he was sent home.  Ernie Banks smiled as he enjoyed his final productive season at the age of 38 with 23 home runs and 106 RBIs.  And Chicago fell in love.

Just five weeks before September 10th, the Cubs lead in the NL East was nine games, and the coronation appeared to be guaranteed.  Three weeks after the Cubs fell out of first, the margin was nine games again, but in the wrong direction.

For those who can’t remember, 1969 was a lot like the Bartman play, but it took two months rather than the blink of an eye and a Moises Alou fit of ill-temper.  I’m not sure which is crueler to fans – the quick pop to the back of the head, or the torture of a prolonged demise.

Fans in Chicago were never the same.  Cubs fans knew the team sucked from 1946-1968, but with shrewd deals that brought Fergie Jenkins, Randy Hundley, Bill Hands, and Jim Hickman, the Cubs nucleus of hall of famers in Ernie Banks, Ron Santo, and Billy Williams had the help they needed to win.

The gaping hole in centerfield was the only weakness in the starting eight, and the Cardinals appeared to be the biggest hurdle in the Cubs way to paying off the loyalty of a fan base too long left dormant in October as others took their turns enjoying the fruits of their faith.

The black cat the leaped (or was thrown) onto the field at Shea Stadium has been blamed for the Cubs demise, as has day baseball.  At that point, every game at Wrigley started at 1:20 p.m., and people said that the Cubs dealt poorly with fatigue as the season progressed because of the adjustments from night games on the road to the day games and back again.

The truth was that the Cubs had four great players (Banks, Williams, Santo, Jankins), six or seven good players (Don Kessinger, Glenn Beckert, Randy Hundley, Bill Hands, Kenny Holtzman, Jim Hickman, and maybe even Paul Popovich), and a bunch of very marginal major leaguers.  As a result, Durocher needed to trot out the same guys day-after-day, and the grind of the season finally took its toll.

The core of the 1969 Cubs continued to play together for four more seasons, all of which ended in disappointment.  Chicago learned to believe that the Cubs were destined to come up short, and the team has never been able to shed that image.  In fact, they have only reinforced it through memorable postseason collapses in 1984 and 2003.

Next month (October 14th to be precise) we will have another day of mourning as the 10th anniversary of the Bartman Game will be marked.

The current tragic state of the Cubs is far less cruel than what fate was dealt to fans in 1969, 1984, and 2003, but being a fan of those teams, while ultimately disappointing was much less troubling than following the current team.

The Cubs not only have no interest in competing, but the owner lied with a straight face when saying that the team might move from Wrigley Field if approval for upgrades was not granted. If not for Wrigley Field, the Cubs would struggle to draw one-million.  This is a bad team by any definition with ticket prices that rival the highest in baseball.

The 1969 team was magical, and because of their love for the game, each other, and their fans, remain heroes.

A just finale for Ernie Banks career as a hitter would be a final swing of a Louisville Slugger to the knees of the current pencil neck owner who pledges adoration for the Cubs while filling his pockets with the hard earned shekels of fans too blinded by their worship to see the theft of which they are a victim.

2 thoughts on “Forty-four Years Ago Today, The 1969 Chicago Cubs Fell from First Place and from Grace”