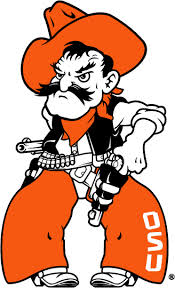 “Hey, Mark Emmert! I dere ya to come to Stillwater with yer fancy lawyers an’ prove we did sum thin wrong!”

If the journalism is solid, the NCAA has two possible responses to the five-part report Sports Illustrated is releasing one part per day this week about the rampant corruption at Oklahoma State from 2001-2011.  They can disembowel the program by issuing the death penalty, or they can throw the rule book in the trash can and acknowledge that the rules and potential penalties have no effect on what many view as corruption, and others see as a market economy working as it should.

The first part of the series available today deals with cash being paid to players in a variety of ways – through bonuses, on demand cash payments, and shadow jobs.  You can read the piece yourself, and will likely have the same response I did.  Of course this happens.  The players have great value to the university, and the boosters love access and wins.  How would cash not migrate from thick wallets in the pockets of cigar chomping businessmen into envelopes given to players?

The image and reality of college athletics are so far apart that either the NCAA is filled with morons – something I don’t believe – or they are unwilling to view themselves as an organization with any responsibility to dedicate resources to ensuring fairness in the enforcement of its rules.

It would be wonderful to believe that football programs can effectively police themselves, but anyone who believes cash, sex, grade fixing, and drugs don’t find their way into players lives with the tacit approval of those running many programs is absurd.  There might be outlier programs that are run in accordance with the rules, but they are likely the least successful in the FBS.

If the NCAA wants to ever be taken seriously again, it has to respond in a profound way to these reports, and it can’t be as the result of an exhaustive 18-month investigation.  If SI’s George Dohrmann and Thayer Evans can uncover what they did in 10 months as journalists, it stands to reason the resources of the NCAA can be brought to bear to achieve the same results in a truncated time frame.

Assuming these allegations are true, (the coaches implicated by the anecdotal evidence offered by former players deny everything), not only should the Cowboys program be imploded, everyone involved should be banned from coaching at an NCAA member institution for life.  That includes current Cowboys head coach Mike Gundy and LSU coach Les Miles, who coached in Stillwater during a significant portion of the decade the report discusses.

The time has come for the NCAA to decide who and what it is.  For how much longer can they continue to issue edicts and rules that are so wantonly disregarded and continue to function as anything but a laughing stock as an oversight organization trusted to maintain a level playing field in the big money world of college football?

I’m not certain which option would provide the more positive result – the NCAA bringing hell down about the corrupt, or abdicating as a watchdog.  America was presented with the same conundrum less than a century ago as prohibition removed the distillation and sales of alcohol from legitimate businesses, and unwittingly turned it over to criminals for 13 years.  Law enforcement was no match for the thirst of Americans who wanted their whiskey.  In 1933, America gave up the fight and breweries and distilleries retooled.

What I do know is that the middle ground where the NCAA currently sits is untenable and reduces the respect fans and members have for it every time a story like this is written.

Available a week from today will be an exhaustively researched book by Jeff Benedict and Armen Keteyian called “The System.”  It’s a fascinating work that celebrates the glory and uncovers the scandal of big-time college football.  None of the illicit behavior is surpassing, but all of it embarrasses the NCAA.

In it, the 20th chapter tells the story of the recruitment of five-star running back Ricky Seals-Jones, currently a freshman at Texas A&M.  His father was offered up to $700,000 if Ricky chose their school.

Everyone accepts as fact that colleges offer a barrel filled with cash for top ranked recruits.  The money is paid by bobos to family members, and there is no trail from the school to the athlete so the NCAA is powerless to stop it.  This is the first time I can recall a father getting specific about the offers, although he does not reveal the schools.

The NCAA is bruised, battered, and perhaps not ready for another fight for the soul of college athletics.  If they are, reforms are needed to provide them the teeth needed to gather on the record testimony.  If not, NCAA President Mark Emmert should stand at a podium and admit defeat.  The corruption may be too big, rendering the rule book meaningless.