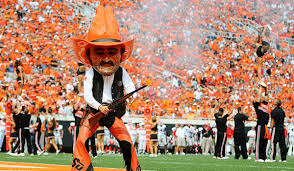 Are the OSU Cowboys the rootin-tootinest outlaw program in America, or did SI get it wrong. Time will tell.

It’s hard from a distance to know for sure whether allegations in Sports Illustrated of wanton disregard for NCAA rules within Oklahoma State University’s football program are baseless, absolutely factual, or somewhere in between.  All we have to judge right now is the first of five pieces in a series, and now a page on the Oklahoma State University website that list responses from university bigwigs as well as some rather random folds from several walks of life.

None of it is incredibly inflammatory or wacky, but I’ve never seen anything like it.  Not sure who was in charge of culling Twitter for pro-Oklahoma State/anti-SI rhetoric, but it led to some interesting – maybe even baffling reading.  Academic institutions rarely rely on ESPN analysts for ammunition to dispel negative press, and while I’m reasonably sure that neither Jason Whitlock nor Darren Rovell were asked to come in on the side of the Cowboys, there is something unseemly about seeing their tweets in this forum.

Below are the most interesting of the tweets and statements on the page, followed by pithy commentary from me.

“Oklahoma State University is deeply troubled by these claims. We will investigate the accuracy of the allegations and take all appropriate action. We do not condone or tolerate improper conduct in our athletic programs. OSU requires everyone affiliated with the university to follow the rules and adhere to the highest ethical standards.”  Statement from OSU President Burns Hargis

What Hargis didn’t say is that losing is also not tolerated, and if the “highest ethical standards” are adhered to but Mike Gundy’s team loses, he will be fired without a second thought.  Ethics in college athletics equates to not getting caught or putting a harsh spotlight on the university.

“In Monday’s news conference, I apologized to our fans and mentioned phone calls I had made to other Big 12 athletic directors prior to the release of the first article from Sports Illustrated. To clarify, my apology was in regards to the negative publicity that was coming our way. My apology was in no way an admission of wrong doing by OSU Athletics.”  OSU Athletic Director Mike Holder

Why would an athletic director apologize to anyone if the journalism is trash and the story isn’t partly factual?  Holder broke the first rule of self defense – never apologize.  Only the guilty apologize.  I don’t think Nixon ever said he was sorry.

“Let me say this ti [sic] all of you, I was never paid or said anything negative about OSU, That Evens [sic] guy is trash for what heworte! [sic] He took what I said and flipped it to his own words! I never said anything about Bobby Reid, Defo, or John Talley! I am embarrassed and shamed of this articale! [sic] I was lied to about what this articale [sic] is about and for that I apologize to everyone for! This is something that will get resolved and I will see to that myself! The guy wrote lies! So for all of you flipping out on me, don’t believe everything you read just because its in a book or magazine! “ Rodrick Johnson, via Twitter

Not sure Rodrick did much to help the academic reputation of Oklahoma State.  “Ti” instead of “to” is an easily explained typo, but “articale” was used twice.  Minus the misspellings and threatening language, that is pretty close to what everyone says when people flip out on them for what appears in print.

“Kudos to Oklahoma St AD Mike Holder for a tremendous statement ahead of the SI allegations. Clinic on how you do it. Pledge transparency.”  Darren Rovell, Twitter

“My God, this might be the journalistic crime of the century. Boomer Sooner got to write takedown of Okie State. Unreal. #plushesahack  I’m too jaded and cynical so you tell me. Is this 10-month SI investigation into Okie State as cliche/pointless as I think?  Long live Taylor Branch and original reporting/perspective. The “Dirty Game” is shamateurism, not $100 handshakes.”  Jason Whitlock, Twitter

Curious that Oklahoma State would choose to use tweets from Whitlock on their website.  I like Jason, but when I have asked several nationally repeated columnists about his work, they all said the same thing, “Oh, you mean the last honest man?”  He trashes other journalists with regularity, but some deserve to be trashed.  My money is on lawyers from Time Warner (conglomerate that owns SI) being very particular in their vetting of the information reported in this series that continues through the week.  Whitlock may be right that this investigation is cliche and pointless as he’s not only “the last honest man”, but correct quite a bit.