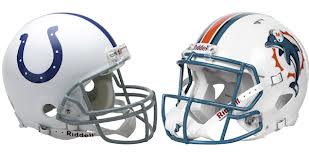 Two members of the Indianapolis Colts aren’t going to get a lot of sleep this week.  Offensive coordinator Pep Hamilton and right tackle Gosder Cherilus will spend a lot of time preparing to face one of the most frightening left defensive ends in football as Cameron Wake of the Miami Dolphins will visit Lucas Oil Stadium Sunday.

Wake tallied 2.5 sacks Sunday against the Cleveland Browns in a 23-10 win.  For the Colts to be successful Sunday, Wake is going to have to be neutralized either through Cherilus winning the battle or by scheming to diffuse his explosiveness off the end.  Not only is Wake worth some sleepless hours, DT Randy Starks comes in on passing downs and creates havoc from the inside.

The reason the Colts may be able to run the ball a little bit is that Wake is indifferent in trying to stop the run.  He didn’t pursue the ball with a lot of energy last Sunday unless it was in the hands of Browns quarterback Brandon Weeden.

Once the Dolphins got the lead against the Browns after trailing 7-6 at the half, the hounds were turned loose, and Weeden was made very uncomfortable.  He threw 59 passes, but only four traveled 20+ yards from scrimmage, and only one of those was completed.  Weeden looked a lot like Tony Eason did during Super Bowl XX against the rabid pass rush of the Chicago Bears.

Weeden’s deep ball percentage last year was only 11%, but he cut that in half last week despite trying to mount a fourth quarter comeback against the Dolphins.

It was exactly for games like this that GM Ryan Grigson signed running back Ahmad Bradshaw.  The Dolphins aren’t very good against the run – or at least they weren’t against Trent Richardson.  This is also an excellent team against whom to throw short to intermediate passes, and that’s what Hamilton prefers.  If Bruce Arians vertical attack were still being used by the Colts, Luck’s life insurance carrier wouldn’t sleep Saturday night.

The Dolphins offense is a study in mediocrity.  There are a few games that Robert Mathis should have circled on the schedule and this is one of them.  Tackles Jonathan Martin and Tyson Clabo were weak on Sunday – particularly the formerly very good Clabo.  The receivers are led by Brian Hartline, Mike Wallace, and Brandon Gibson, and there isn’t a whole lot of risk taking with Hartline and Gibson.  Gibson is a good-enough-to-stay-in-the-NFL guy who will make the occasional play, but drop balls he shouldn’t at the worst times.  Not great speed, not great hands, and not elusive after the catch, Gibson’s inclusion on a roster signifies an acceptance of mediocrity.

Wallace was a major free agent signing in the offseason for the Dolphins, and after whining about his five targets and one catch compared to Hartline’s 14 and nine, it’s likely Tannehill will take do what he can to get Wallace involved.  Tannehill was ranked 26th in his rookie season in deep balls thrown, but he was in the top ten for completion percentage on those throws.  The Browns got to Tannehill four times, which led to his limiting deep balls to only four.  Only one of those was completed.

The running game is driven by the efforts of backs Lamar Miller and Daniel Thomas.  Against the Browns, those two ran 18 times for 17 yards – and the Dolphins won!  How?  The Dolphins aren’t going to score or control the clock by running the ball.

As for the Colts, they beat the Raiders because Grigson was smart enough to draft Andrew Luck #1 overall in 2012.  Luck was a splendid field general Sunday completing 18-23 for 178 yards.  On balls thrown less than 20 yards beyond the line, Luck was 18-19.  When the Raiders blitzed, they got to Luck three times, but he completed 10-11 for 100 yards and one TD.  When not blitzed, Luck was 8-12 for 78 yards and one TD.  The moral of that story is that regardless of the defensive game plan, Luck is really good.

Throwing the ball is only half the battle in completing a pass, and Reggie Wayne is as good as there is on the other end.  He was targeted eight times, and caught all eight passes for 96 yards.  There were five defenders that Wayne beat to earn those five catches.  He is the gold standard, and with only moderately talented targets elsewhere, Wayne and tight end Dwayne Allen must make plays for the Colts to score enough to win.

The Colts season and this game will be determined by the excellence of Luck.  They aren’t good enough yet on the defensive side of the ball to win without Luck playing at a very high level.  Other than DE Lamar Houston, the Raiders are average to poor virtually everywhere, and the Colts nearly lost their home opener to them, and that was with Luck playing on an elite level.

This game against the Dolphins is a pretty good matchup for the Colts.  Oddsmakers have the Colts as a three-point favorite.  Home field being worth three points tells us that no one really knows what to make of these two 1-0 teams.  When all else is pretty close to even as these two teams are, pick based upon the quarterback.  Luck has won enough to believe that he will continue to win, and the Colts should do just that.

Keys for the Colts:

Keys for the Dolphins: