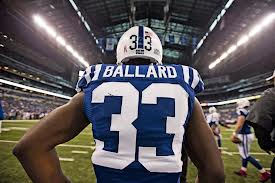 Vick Ballard had a pretty good day against the Oakland Raiders, and gave the Colts a chance to keep Ahmad Bradshaw healthy and rested for another week.

After running 13 times for 63 yards, he looked like a lock to continue to earn the lion’s share of the carries in what Colts coaches hope will be an improved running game.

All that’s out the window, as Ballard tore his ACL in a “freak, non-contact” injury, and has been placed on IR.

Now, the Colts turn to Bradshaw and the much maligned Donald Brown to pick up the slack and keep the chains moving while quarterback Andrew Luck waits for opportunities to throw.

The good news is that if a freak injury had to happen to someone, it’s good that Ballard was chosen as the recipient rather than Luck, Reggie Wayne, Anthony Castonzo, LaRon Landry, or any of the others beneath whom there is a substantial gap between starter and backup.

More good news is that practice squad member Kerwynn Williams is not dissimilar to Ballard in structure and talent.  Whether he’s ready to pick up blitzes from the Dolphins is another question entirely, but can he find space and accelerate through it at a Ballard-esque level?  Sure looked like it during preseason, but half the job is finding the blitzing or unmarked rusher, and getting between him and Luck.

Injuries are going to happen, and while we can be sick for Ballard, if a freak injury had to befall someone the Colts are as prepared to weather it with Ballard as any starter.

Had Ryan Grigson not dipped into Jim Irsay’s wallet to sign Bradshaw, this postwould would a far different and more ominous tone.

This injury shouldn’t have a substantial effect upon Sunday’s outcome.  If you were going to give the three points and take the Colts, you should still do that.