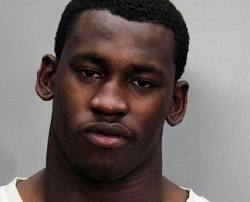 This is the mugshot of Aldon Smith following his first arrest for DUI less than two years ago.

Engrained in uniquely talented athletes from the time they are in middle school is that the rules that govern society don’t apply to them.  Life has no black and white for game-changing athletes – only shades of gray where greatness may continue to be tapped by a coach who values wins over all else.

That is the reason Aldon Smith will be allowed to suit up and raise hell against the Indianapolis Colts on Sunday two days after being arrested for drunk driving and marijuana possession.

This isn’t Smith’s first entanglement with the legal system.  He was also arrested for DUI in January, 2012.  Six months later Smith was stabbed at a party he hosted, and according to California Highway Patrol was a passenger in a vehicle that rolled over near his home.  Smith is also being sued for shooting a party guest.  He is accused of shooting a guest accidentally when he fired to signal the end of the party.

Smith’s DUI this morning (he was arrested at 7:00 a.m. after crashing his pickup into a tree) is the fifth in the last three years for the 49ers.

Whatever efforts of remediation have been taken by the 49ers obviously haven’t worked, as Smith continues to behave as though the rules that keep our society from breaking at the seams do not apply to him.  There is good reason for that – none of the consequences have been meaningful enough to cause a change in his behavior.

It was no surprise when 49ers coach Jim Harbaugh told reporters today that he expects Smith to play because in the NFL, talent wins, and winning trumps everything.  So the talented Smith will play as he always has, and then do whatever he likes because he has been taught that rules don’t apply to him.

Click here to take learn about the best dentist in Indiana

People wonder how some NFL players become train wrecks after their playing days are over.  The sad plight of Smith is a good example of the mess that can be created by authority figures who refuse to hold people accountable for aberrant behavior.  When his talents abandon him, and he is held to the same standard as everyone else, expect another in a long line of disasters.

Smith’s saving grace might be that the NFL can respond to the second arrest by suspending Smith.

When the St. Louis Rams visited San Francisco last season receiver Chris Givens, cornerback Janoris Jenkins, and defensive tackle Kellen Heard committed a victimless behavioral lapse that troubled coach Jeff Fisher.  Givens and Jenkins – two exceptionally valuable cogs in the Rams machine – were immediately suspended for the 49ers game, and Heard was cut.  This was a huge game for the Rams, and it ended in a tie.

Fisher acted decisively in a way that penalized his team, but will benefit Givens and Jenkins forever.

To this point, Harbaugh has shown a complete indifference to Smith as a young man, while prizing his value as an outside linebacker.

It’s not Harbaugh’s job as a coach to mentor his players, but it is his responsibility as a man to help a soon to be 24 year-old who appears to be navigating poorly through the slalom course of life as a professional athlete.