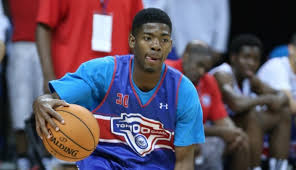 Robert Johnson crossed over the Tar Heels, and drove to Indiana.

The 2014 class is no longer vacant for Indiana.  With two scholarships to give, Indiana was left hoping a couple of top recruits would pledge Indiana, and one of them has.

Robert Johnson from Benedictine College Prep is 6’3″ and can flat out shoot, and can get to the bucket.

He is ranked just outside ESPN’s top 100, but #42 on rivals.  Rankings are virtually meaningless, as Indiana fans learned with Victor Oladipo who turned his #144 in the high school class of 2010 into the second player taken overall in the 2013 NBA Draft.

What’s it all mean?  Other than a well thought of kid choosing Indiana is better than his choosing another top program must be a positive, who knows?  He chose Bloomington over Chapel Hill, so Crean and the Indiana athletic department must be doing a lot of very good things.

That leaves Tom Crean with one spot open, but as when saw last year, he is not adverse to over-signing.  The most likely commitment to fall next to Indiana is Goodluck Okonoboh, who visited Bloomington last weekend.  He’s a very athletic 6’9″ power forward, who is a good friend of IU freshman Noah Vonleh.

One thing that can be said about Crean is that he tends to recruit kids who are effective ambassadors for spreading the Hoosier gospel, and Vonleh working Okonoboh will doubtless provide an advantage.

There are other candidates for the other scholarship, including James Blackmon who decommitted to open that second spot.  It’s doubtful Blackmon will want to compete with Johnson, or that Johnson would have passed on North Carolina if there was a great chance Blackmon might choose Indiana.

Devin Robinson is a long and athletic wing who is also considering Florida, Notre Dame, Connecticut, and Oklahoma State.  He’s a little skinny, but so was Vonleh, and now look at the kid.

A class of Johnson, Okonoboh, adn Robinson would be a trio of late commitment home runs for the Hoosiers.

With talk that Vonleh may be a candidate to exit early for the NBA, Robinson might be an excellent candidate as a replacement in that spot.