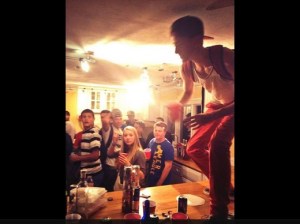 Idiots self-chonicle the destruction of a house. Brian Holloway is trying to hold them accountable.

There is nothing sadder than kids of wealthy parents who are left to raise themselves.  The parents buy the kids all kinds of crap, but refuse to give them the greatest gift of all – boundaries.

So the kids lose their minds, make mistakes of self-indulgence, and when someone tries to bring a strong consequence to bear, the parents lose their minds and shield the kids from any penalty because the punishment would require an admission that their skills in raising children is lacking.

On August 31st, an estimated 300 teenagers broke into former NFL offensive lineman Brian Holloway’s house in Stephentown, NY, and hosted a party that tweets from the kids described as “bangin.'”  Holloway and his family were in Florida and the house was unoccupied at the time of the party.  They tore the house apart by breaking windows, drenching carpet in beer and liquor, punching holes in walls, dragging kegs across hardwood floors, and spray painting graffiti on exposed beams and wood paneling.

Holloway struck back by launching a website, helpmesave300.com, which details the damages, posts the tweets of the morons too stupid to avoid admitting their part in a crime via social media, and calls for parents to step up to do the disciplinary work their kids might not desire but absolutely need.

Parents and kids are asked to show up to help return the house to normal prior to a picnic that Holloway is hosting tomorrow to honor veterans, military personnel, and their families.  So far, one parent has shown up.

Worse, several parents have threatened to sue Holloway for exposing their children on the website.  Holloway has deleted a list of the names of the people he was able to determine were at the party, but the tweets that detail the wanton idiocy remain.

The parents who would threaten to sue are the lowest of the low.  There are drug addled parents in our society who ignore the needs of their children because of addiction.  It’s tragic, as children suffer because a disease makes responsibility impossible.  What goes on with these parents is worse because they choose not to pay attention – to take their kids word as gospel, and not hold them accountable for their actions.  Their priorities are selfish, and the kids parent themselves.

It’s a tragedy that these kids, and they aren’t just in Stephentown but virtually everywhere, are going to be released into the wild of adulthood with no earthly idea what real life is like.  They will drift and wobble searching for the next fun thing because they don’t realize how fulfilling it is to accomplish something.

And then they will marry, procreate, and wreck yet another generation of children.  And on and on it will go.

Go to Holloway’s website where you can read both the wisdom and decency of Holloway, and then peruse the ridiculous tweets from the kids who busted up his house.  Make a donation, but not to help defray the cost of the damage because that’s not what Holloway wants.  What he would prefer is a donation to Making Strides Against Breast Cancer.

Only two things I would change in Hollway’s approach to dealing with what the teens and parents clearly see as harmless mischief are that I would gleefully press charges.  If convictions keep any of them from being accepted into the college of their choice, that’s called a consequence, and that’s what happens when you act without regard to another person’s property.  Those parents, (minus the one that showed up to help clean), can’t be trusted to make this a learning moment for the kids.

Holloway writes on his website that lives are at stake, and he’s right.  The parents who raised these idiots to this point can’t be trusted to start raising them right today.  Let the law enforcement community take over.  That’s why they are there.

And if parents threaten to sue, I would tell them to pack a damn lunch.  See you in court, you self-immersed jags!  I would count the days until I got to see them in a courtroom.

The best thing a parent can provide a child is meaningful consequence for each mistake.  That Holloway appears to be the only adult doing the right thing in Stephenstown is a tragedy.  By getting away with a total disregard for the property of others, the kids are learning a lesson that will cause them nothing but pain down the road.

At some point, Daddy and Mommy won’t be there to make it all better.  Hopefully, this is it.