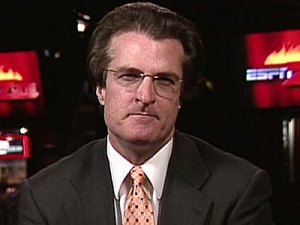 Indianapolis Colts GM Ryan Grigson must feel a little like Bill Tobin did almost 20 years ago when ESPN’s Mel Kiper ripped Tobin and the Colts for drafting Nebraska linebacker Trev Alberts.  The two situations aren’t really similar, but the argument between Tobin and Kiper is one of my favorite all-time draft moments.

That Alberts first proved Kiper right by questioning why he was taken fifth overall went a long way toward validating Kiper’s perspective, and the rest of that validation came from Alberts poor play.

Today, Kiper wasn’t quite so outspoken in assessing the relative merits of the trade for the Colts and Browns.  While he claims to “understand” why the Colts jettisoned a first-rounder for a good player at a position where replaceability is almost a given, he “loves” the trade for the Browns.

Kiper says about the Colts, “The Colts are looking to establish a power run game to complement and protect a great quarterback. They want to become more multiple. But they’re doing that because they have that great quarterback. A healthy Richardson has far more value to them than he does to the Browns.”

A little more damning is this comment from Kiper, “I’m surprised a team (the Browns) could get a first-rounder for any running back, much less one with any recent injury issues.”

About the Browns, Kiper was effusive, “It’s a great move for the Browns, who just got a ton of value for a player they couldn’t maximize anyway.”

The overall reviews for the trade are relatively positive from the national experts as many claim the deal is a win-win.  The local reaction in Cleveland has been incredibly negative, but that’s because the Browns have picked the rebuilding scab again and again.  The scar is ugly, and the bleeding may never stop.  People in Cleveland are already an ill-tempered lot, and Browns management waving a white flag two games into a season makes season ticket holders feel like idiots for spending hard-earned cash.

Funny how people don’t enjoy looking in the mirror and seeing what they have been told or shown is a moron stare back.

It’s a little like buying a car that craps out after two weeks, and when you talk to the people at the dealership, they guy says, “Oh yeah, those cars are junk.”  That behavior doesn’t encourage return business.

If Kiper is right, as he often is, Browns fans will be very happy in three or four years, but that doesn’t make them feel any better today.  If the Browns want a bit of a preview of where they might be headed, the St. Louis Rams are on a similar arc, just a couple of years ahead.

As for the Colts, they got a running back who just turned 22, and is on the upside of a career likely to last until he turns 30.  The Colts passing offense is good enough that no one is going to throw eight in the box to stop Richardson.  Vick Ballard, the 11th back taken in the 2012 NFL Draft, rushed for 3.9 yards per carry last season for the Colts, so Richardson should be good for a minimum of 4.0 as the 3rd overall pick in the same draft.

Richardson has been playing against the Bengals, Steelers, and Ravens twice each as a member of a team in the AFC North.  With the Colts, he’ll find the AFC South defenses of the Jaguars and Titans a little more to his liking.  The Texans might be an AFC North-esque challenge.

The Colts found a piece they needed to remain competitive in a place where he didn’t fit.  This was similar to the trade with the Miami Dolphins last year that swapped a second rounder for cornerback Vontae Davis.  The real question is whether there will be someone on the board at 20-24 who Grigson would covet more than Richardson.  Because he pulled the trigger, I’m guessing he doesn’t anticipate that happening.

Kiper as the draftnik that he is, of course sees the advantage to the Browns as potential always fascinates him more than reality, but the key is where the pick slots, and what Browns GM Michael Lombardi chooses to do with it.