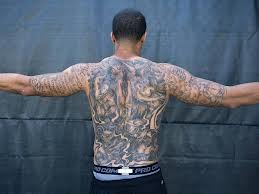 The Colts need to hope all that ink weighs down the very athletic Colin Kaepernick.

There are so many question marks about the 49ers vs. Colts game that it defies analysis.  The Colts acquired running back Trent Richardson from the Cleveland Browns less than 24 hours ago, and the 49ers have played well once in beating the Packers at home and poorly the second in Seattle.  Will Richardson be a factor in San Francisco, and which 49ers team will show up at Candlestick Park Sunday?

Richardson is unlikely to be much of a factor, as he is unlikely to have enough time to digest much of the playbook or become comfortable with his new teammates and scheme.

Colts fans should expect to see a team vastly different from what showed up Sunday night in Seattle when the Seahawks pounded the Niners 29-3.

The 49ers are profoundly talented, led by the left side of their offensive line.  Guard Mike Iupati and Tackle Joe Staley are elite level players, and the right side isn’t bad either with guard Alex Boone and Anthony Davis.  None played well against the Seahawks, and the offense turned the ball over five times.

Seattle is an absolutely miserable place for opponents to play.  The stadium was built to funnel the crowd noise down to the field.  People accused Bill Polian of pumping noise into the old RCA Dome in Indianapolis, but that isn’t necessary in Seattle.  It’s the loudest I have ever heard a crowd – disconcertingly loud.  The environment will obviously be much more conducive in San Francisco to operating a functional offense for the 49ers.

While the running backs for the Dolphins weren’t much to worry about last week for the Colts, the 49ers Frank Gore is a different challenge.  Gore has had two very difficult games, and will look to get well against the Colts.  Through his six previous seasons, Gore has been incredibly consistent, averaging between 15 and 18.5 carries per game, between 73.5 and 80 yards per game, and between 4.2 and 4.9 yards per carry.  His receptions have diminished over the last couple of seasons, but it’s the 60 yards on 30 carries combined in weeks one and two that will see a correction Sunday.

Defensively, the 49ers are scary in spots.  Alden and Justin Smith are disruptive on the right side, and Patrick Willis is a likely hall of famer in the prime of his career.  The safeties are a weakness, but that doesn’t do the Colts much good if they can’t block the front seven on runs, or keep Andrew Luck on his feet long enough for the receivers to get to that level of coverage.

The 49ers aren’t the second coming of the 2003 New England Patriots, but with Kaepernick able to create offense out of positive plays by the defense, they are a tough beat – especially at home.

The Colts are a complete mystery going into Sunday, and with three players being ruled out for the season within the last week, plus the acquisition of Richardson, if there was ever going to be a game where they might throw up a total nightmare of an confused effort, this could be it.

On the plus side, this was a game that very few circled as a win for the Colts.  Even those optimistic enough to see this as a potential 12-4 season had this game as a loss.  To have this many question marks against the Rams or the Seahawks could cause a loss where a win might otherwise have been earned.

Logic would dictate that a team unable to beat the Dolphins on their home turf will have a very tough time competing against a group that went to the Super Bowl nine months ago.

There is a reason for optimism.  With Mario Manningham and Michael Crabtree on the shelf, the receiving corps is weak.  Anquan Boldin is 33 years old but still productive with 14 catches and 215 yards through the first two games.  Tight end Vernon Davis is pretty good too, but the rest of the group is weak and weaker.

The Colts have a quarterback who is at least the equal of Kaepernick, and his targets are superior.  But this game will come down the the line play.  The more I’ve learned about football, the more I’ve written or said that.

I think the stars are lined up for a Colts train wreck, but Luck is such a dynamic performer that he might find a way to climb into the engine of that runaway locomotive to hit the brakes.  As a last ditch hope to find external reasons for hope, I checked the weather forecast.  Weather is supposed to be ideal, although a little windy.  Too bad.

The 49ers are 10-point favorites, and they will come out angry after being embarrassed in Seattle, and take it out on the Colts.  Jerry Tarkanian famously said, “the NCAA is so mad at Kentucky, it will probably slap another two years’ probation on Cleveland State.”  That will sum up what happens in San Francisco.  The 49ers are so pissed at the Seahawks, they will going to make the Colts pay.